Advocating for those who look like him, Rudy Vargas helps undocumented students find support 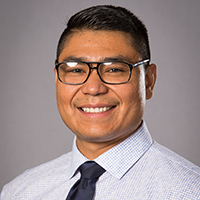 Rudy Vargas knows about earning success the hard way. He’s faced challenges in his life with limited resources and support. He overcame them, but he doesn’t want others to have similar experiences. Along the way, he determined that he would devote himself to serving under-resourced communities.

Vargas, who moved in 2004 at age 12 with his family from Mexico to Greeley, is currently the coordinator of the DREAMer Engagement Program and Undocumented Student Services at the University of Northern Colorado (UNC). In that role, he works to secure support services for students in the DACA (Deferred Action for Childhood Arrivals) program and other students considered undocumented.

With Vargas’s help, more than two dozen undocumented students have graduated from UNC in the past three years, and many more are on track to achieve the same goal. This despite the fact that on average undocumented students take six or seven years to earn their degrees, Vargas said, because of financial, legal, and other challenges.

“I tell people I thought I had had a hard life until I started working with people who are undocumented,” Vargas said. “Many of them work two or three jobs while attending school, with no access to [health] insurance, and they still make it work.” They also pay taxes but aren’t eligible to receive many services because of their citizenship status, he noted.

Vargas’s work recently drew attention from the Colorado School of Public Health, where he is also enrolled in the Master of Public Health program on the UNC campus. In late May, he earned the Student Award for Excellence in Public Health Practice, in recognition of his efforts to engage with and support underserved communities in Greeley.

His efforts that contributed to the award are many. To name just a few: a $9,000 grant from the Mexican consulate to support first-year undocumented students at UNC, with a matching grant from the university; scholarships for DACA students; collaborations with community organizations to support undocumented students; input as a panelist about the threat of COVID-19 to communities of color and the need for additional support to protect them; and wide-ranging committee work at UNC to bolster student success and inclusivity.

“My goal is to advocate for people who look like me,” Vargas said. Specifically, he called his advocacy on the COVID-19 panel “very meaningful and a milestone in my public health career” because he was able to lend his voice in support of a vulnerable community that too often is unheard and ignored.

Vargas emphasized he received crucial support from the university for many of these efforts. That included statements in support of DACA students from UNC President Dr. Andy Feinstein. Vargas also noted important help from Dr. Tobias Guzmán, UNC’s interim vice president for student affairs and chief diversity officer.
“Dr. Guzmán listened to the things I had to say and was my main source of support, along with Dr. Feinstein,” Vargas said.

He comes to his empathy and understanding for others through his own experience. During his teenage years at Greeley Central High School, Vargas said he struggled with his weight, finally hitting 236 pounds. He couldn’t afford a gym membership, equipment, or even healthy food, but he worked out on his own to drop the weight. Despite that effort, he said he later struggled with anorexia and depression.

That rough road didn’t defeat him but rather strengthened a deep-seated resolve to assist others. Vargas enrolled as an undergraduate at UNC with the goal of teaching Spanish, but his teenage struggles called him in another direction.

“I always had this feeling that I wanted to be helping people in the community,” Vargas said. “Specifically, I wanted to help people lose weight and provide guidance on how they could do that in a healthy manner.”
He ultimately decided to pursue a master’s in public health after consulting with Dr. Liz Gilbert, professor of Community Health Education at ColoradoSPH at UNC. His goal at that time remained developing community programs to help Latinx children struggling with being overweight. After a few classes, though, Vargas said he saw a new path.

“I realized there were so many things I wanted to do in the community,” he said. “I had worked with undocumented students and saw there was a greater need to support that population because of their lack of access to resources,” including medical care, financial support, and social services. Fear of deportation erects another barrier to help for undocumented students, Vargas added.

The challenges contribute to a sense of isolation among the undocumented. Vargas can relate, while emphasizing his road was not as rocky as theirs. He recalled his first day at a residence hall at UNC with little to his name but the $10 his parents gave him for pencils and notebooks. He received scholarship money that eased the financial pressure, but still vividly recalls the sense of “feeling lost” in an unfamiliar environment.

“I would hate for any students to feel that way, to come to college and feel they don’t really have that much other than themselves,” Vargas said.

He views his community work as a way to combat those feelings and intends to continue it for the remainder of his career. Vargas is now on the board of directors of the Immigration and Refugee Center of Northern Colorado, which works in numerous ways to support immigrants and refugees and successfully integrate them into the broader community. Vargas called his participation with the board another opportunity to collaborate with other organizations assisting communities of color.

“I love being in the community,” he said. “I have told myself I never am going to look for a job just for financial purposes. I want to make sure I work somewhere I am passionate about.”