The COVID-19 Pandemic: The latest Colorado modeling results are troubling 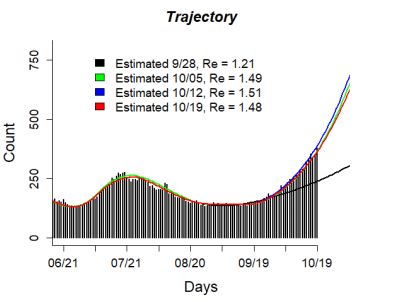 Quoting George Box, the British statistician once again: “All models are wrong, but some are useful.” The Colorado COVID-19 modeling group, with members from CU Anschutz, CU Denver, CU Boulder, and Colorado State University, has now been tracking the course of the pandemic in Colorado for seven months. The team works in collaboration with the Colorado Department of Public Health and Environment (CDPHE) and the Governor’s office, providing weekly updates on the status of the epidemic in the state and providing projections of the epidemic’s course for decision-making purposes. The modeling addresses: 1) what has happened; and 2) what could happen.

As a reminder, following the March/April peak of the pandemic in Colorado, the epidemic curve rose again across July, but fell and remained down until mid-September. Since then, transmission control has dropped and RE has remained at about 1.5 when estimated over the past three weeks. The result: a steeply rising epidemic curve with increasing cases and hospitalizations, up to 515 today. The model projections indicate that we are on course to surpass the peak hospitalization figure of 901, absent an increase in transmission control over the next several weeks.

To guide decision-making, the SEIR model is used to make “what if” projections describing what might happen in future scenarios. The coming holidays represent a time of concern as travel will increase and there is typically more mixing among age groups as families and friends gather. The modeling projections are worrisome, as any further harmful reduction in transmission control, added onto the rising epidemic curve, will accelerate the rise and increase the height of the curve’s peak.

What do we do as the epidemic worsens in Colorado? Actions by counties/local public health agencies are set by the counties’ levels on the COVID-19 dial dashboard. Currently, most counties are at Safer Level 1 or 2 and only one (Adams County) is at the more severe Safer Level 3. However, the new surge will move some counties to a higher level and necessitate action. On Friday, the CDPHE announced a statewide measure limiting personal gatherings to no more than 10 people from two households. There likely will be further measures plus reminders of the need to fully adhere to the personal behaviors that can make a difference.

One strategy that I will not recommend is attempting to achieve herd immunity as called for by the so-called Great Barrington Declaration. This document, now signed by thousands, proposes that we move towards herd immunity by letting the epidemic spread unfettered among those who are the least likely to develop severe illness and die while protecting those who are at greatest risk. The argument is offered, without support from modeling or other evidence, and the claim is made that such “focused protection” reaches the needed risk-to-benefit ratio. A different view is offered in the John Snow Memorandum, also signed by thousands. Carefully reasoned arguments are made against the herd immunity strategy of the Great Barrington Declaration. Tellingly, the town of Great Barrington, Massachusetts has disavowed any connection to its namesake declaration. And, unfortunately, dueling statements erode public trust.

Some good news: the clinical course of COVID-19 has become more favorable since the start of the pandemic. Two reports, one from a hospital system in New York City and the other from England, showed striking improvements in mortality for those admitted to a hospital with COVID-19. In the New York City study, in-hospital mortality dropped from 25.6% in March to 7.6% in August with adjustment for changes in patient mix. Here in Colorado, length of stay dropped sharply after the first two months of the pandemic.