The COVID-19 Pandemic: The epidemic curve oscillates, and worse, another mass shooting—in Boulder 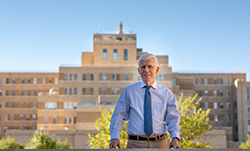 On March 22 at 2:30 p.m., I had a break in my Zoom schedule and my wife Connie and I set out on a quick trip to Neptune Mountaineering, a few miles away, to buy a guidebook for an upcoming trip. Short of our destination, Broadway was closed by Boulder police and, as we regrouped, a Denver Post notification pinged my phone with the news of an active shooter event at our destination shopping center. The next morning, we learned that 10 people had been murdered in our neighborhood. I did not want or need a reminder that these tragedies happen in everyone’s neighborhood. On Friday, we passed another King Soopers with an armed guard in tactical gear out front. We drove past the Boulder Police station with Officer Talley’s car in front covered with flowers—a somber and reflecting crowd adjacent. Faculty and students have written to me about the shootings, which took place in the neighborhood where they grew up. Read faculty member Katie Dickinson’s comments about this store in her childhood neighborhood where her mother still shops.

Gun violence has long been labeled as a public health crisis. With more than 38,000 deaths annually from firearms, around 24,000 from suicide and 14,000 from homicide, it is a crisis and a series of preventable tragedies. I am avoiding the term epidemic, an occurrence of events beyond the normal and what is expected. Gun violence has become the norm, as have mass shootings. We are numbed by the repetition of tragedy and the stereotyped dialogue that follows each one and that inevitably stalls in moving toward any solutions.

In public health, we have a problem-solving paradigm that begins with problem definition and characterization, a search for causes, and the implementation of interventions to mitigate the causes with tracking for success or failure. We are far along in describing the components of this paradigm for gun violence, and poised for interventions, but they have not happened.

In public health, we also look at the chain of causes, searching upstream in the chain for stopping points—points at which intervention will end the downstream consequences. With tobacco-caused diseases, for example, the chain ends upstream with the multinational tobacco industry and reaches down to smokers ensnared by nicotine addiction. In tobacco control, we have focused heavily downstream on preventing uptake, promoting cessation, searching for drivers of susceptibility, and screening for smoking-caused diseases. After a century of unfettered marketing and sales by the tobacco industry, litigation, and regulation, a shift in public norms around smoking has brought pressure upstream on the industry where it is needed to end the smoking epidemic.

We can draw a similar causal chain for gun violence. It begins with gun manufacturers and ends with injury and death. There are many parties along the way that sustain the chain: far upstream is the National Rifle Association (NRA), and politicians using their clout while under the influence of the NRA and others; and more downstream, the gun sellers. At the chain’s end, there are myriad motivations for those using guns to kill, sometimes unclear even to those doing the killing.

There is puzzlement about the explanation for the killings in Boulder, focused way downstream on the murderer at the end of the chain. These “why” questions should be answered, but the chain did what it is intended to do—it put an assault weapon into the hands of someone who would use it. Yes, we need to prevent suicide by identifying those who may use a gun to end their life, and prevent violence by those who aim one at others. Above all, we need to break the chain. The analogy to downstream measures around tobacco smoking is obvious as is the rationale for acting upstream. Perhaps, the Kabuki theater of discussion after tragedy among politicians will end this time with progress and not a stalemate. The Biden Administration might be able to break the national logjam. Discussions about gun control at the Colorado Legislature are encouraging at the state level.

What do we, the public health community, do in the face of continued gun violence? We carry out research to strengthen the evidence to support prevention and provide informed advocacy and policy. The collaborative Program for Injury Prevention, Education, and Research (PIPER) is one focal point in the Colorado School of Public Health—and today, PIPER released a study published in The Journal of Pediatrics that found 22% of high school students (1 in 5) have easy access to a handgun—but relevant work is done throughout the school and the campus. As a school, we also convene and discuss as we did with the major symposium on the state of the science of prevention at the 20th anniversary of the Columbine tragedy. And we can provide models for evidence-based policy for translation into action.

The mission of the Colorado School of Public Health is to advance public health in Colorado, the Rocky Mountain region, and beyond. Gun violence, a public health crisis, falls within the scope of our mission and we will look at how to strengthen our work. Many of us are fueled by anger and sadness at the recent killings in Boulder, piled on top of those in Atlanta the prior week, piled on top of… The killings need to stop; let’s start by not selling any weapon with the label assault. That is what they have been used for in our neighborhoods—assault.

Last week, there was also continued uncertainty about Colorado’s epidemic as the descent of the epidemic curve remained stalled. I don’t have a prediction for now, but I am hopeful that the curve will bend once more with vaccine rollout. For now, the worrisome plateau continues.