As I started on these comments, I was in a plane at a United gate in Boston awaiting the arrival of police to remove a passenger who refused to wear a mask properly. What calculus leads to this outcome? Unfortunately, this personal experience is being replicated in different ways and in different places. Over the last weekend, the truck blockades in Canada on bridges from the United States to Canada were cleared, although protests continue in Ottawa. Costs to businesses were substantial and many Canadians were inconvenienced and some threatened. The target of the blockades and the protests in Ottowa: public health measures—specifically, vaccination and mask mandates. Again, what calculus leads to disruptions that harm commerce and people, and are directed at measures intended to protect all of us?

In Colorado, county mask mandates have been largely dropped. If needed again, are we prepared to provide appropriate respiratory protection? Since November 2020, I have chaired a committee of the National Academies of Sciences, Engineering, and Medicine that was charged with developing frameworks for providing respiratory protection for workers not covered by a respiratory protection program under the authority of the Occupational Safety and Health Administration (OSHA) and also for the population-at-large. The task was formidable and addressed by a highly multidisciplinary group that included CSU faculty member John Volckens, along with members with expertise in policy, behavioral and social sciences, occupational health, pediatrics, systems thinking, industrial hygiene, local public health, and more.

Last Thursday, the report was released along with a commentary in the Journal of the American Medical Association. In more than 500 pages, it provides background on the regulatory tangles related to respiratory protection, the current state of respiratory protection for workers generally, and the near vacuum around the general public. With the goal of providing appropriate respiratory protection on a timely basis for everyone, the committee developed a systems-based approach built on key principles, including equity (see figure). The committee’s general framework extends from mask development and certification to putting devices into the hands of users, educated and trained to know how to use them. For workers covered by OSHA, the functions contained in this general systems framework are met, albeit imperfectly. For the many uncovered workers, including, for example, wildland firefighters and service workers, OSHA provides a starting point, but much capacity needs to be built if protection is to be available to uncovered workers. 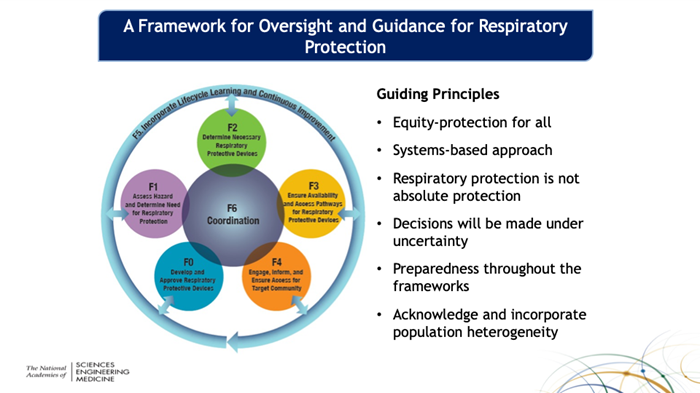 For the public, unlike workers, no specific governmental entity is charged with oversight for respiratory protection. As a starting point, the committee recommends that one be established within the Department of Health and Human Services. Looking across the six functions of the committee’s framework, much needs to be done. With regard to devices, there is no certification system in place, and we lack devices for young children. We need research to better understand the hazards faced and the risks posed so that we can trigger use of respiratory protection when needed. For workers and the population, ensuring an adequate supply when needed has proved to be a failure point so far in the COVID-19 pandemic. And, for both groups, approaches for providing masks and ensuring that wearers know how to use them are needed, but they must match the diversity and heterogeneity of the U.S. population.

The committee grappled with terminology, as there are technical specifications and definitions for some devices, but not all. At the moment, the most widely used terminology describes the devices loosely as “masks”, but, in fact, some are respirators (N95) certified by the National Institute for Occupational Safety and Health; some are medical/surgical masks approved by the Food and Drug Administration; and some are barrier face coverings meeting the specification of a new standard of the American Society for Testing and Materials. The devices worn by the public most commonly are face coverings that are not made to any standard and that are not approved by any certifying body. Absent an umbrella term, the committee adopted "respiratory protective device" for that purpose, acknowledging that such devices can function for personal protection and, also for source control, depending on the hazard. For example, for an airborne infectious agent, a respiratory protective device may limit the projection of larger droplets and provide some protection against inhalation of smaller aerosols. For wildfire smoke, a respiratory protective device functions as personal protection.

What happens next? Reports from the National Academies sometimes become a template for action—the committee’s hope and expectation. The committee called for sweeping actions that involve the White House, the Congress, federal agencies, and state and local public health. There could not have been a more propitious week for the report’s release given the intense focus on mask mandates, but sustained action is needed for the long run. A first step is the report’s release and the briefings about the report that have followed with the White House’s Office of Science, Technology, and Policy and committees of the House and Senate. Quoting the report:

“It is impossible to know what is coming next, but the nation must be better prepared for future airborne threats. Given the human and financial costs of inaction, the nation cannot afford to repeat the ad hoc efforts made during the COVID-19 pandemic to address safety and respiratory protection. All workers and the public need to be able to turn to a clear and authoritative source of information on respiratory hazards and how they can protect themselves from those hazards, as well as a system in place for providing accurate guidance and support to ensure access to and effective use of respiratory protective devices. Furthermore, the needs and resources of the most vulnerable population groups must be considered. The problem is of such magnitude and the current systems are so fragmented that action is required at the highest levels. As climate change increases the incidence and severity of wildfires, hurricanes, floods, infectious disease outbreaks, and other phenomena that impact air quality and human health, it is imperative that the United States close the gaps addressed by this report and ensure that the respiratory protection needs of all workers and the public are met.”

And a Colorado update—the epidemic curve continues its steep decline with COVID-19 hospitalizations at 773 statewide on Friday, far below the Omicron peak of 1,676 on January 18. Good news, but remember, the year is 2022 and not 2019.

And, the noncompliant passenger was deplaned by the police to the cheers of passengers.