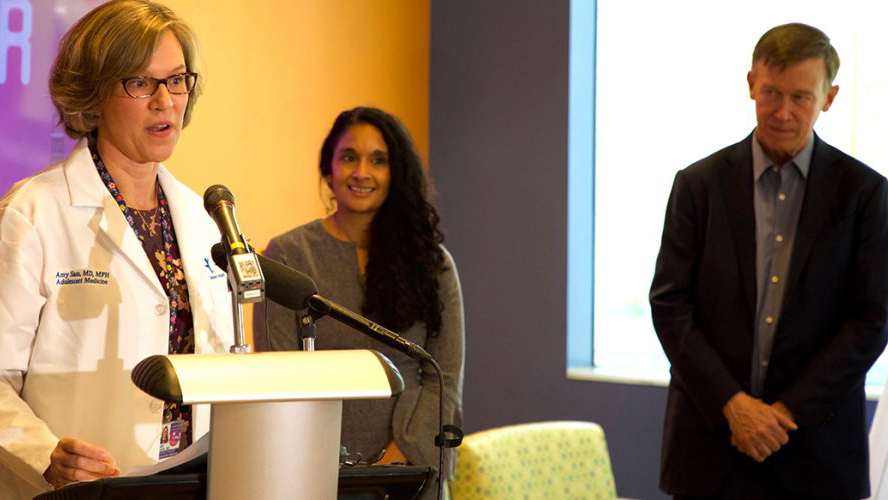 Gov. John Hickenlooper joined leading health organizations in calling for a reduced tobacco use and vaping among youth — an urgent issue given a recent report that Colorado leads the nation in teen vaping.

In a press conference at Children’s Hospital Colorado, Hickenlooper signed both a proclamation recognizing “Vape-Free November” in Colorado and an executive order that takes steps to curb vaping. Also speaking were Amy Sass, MD, associate professor of pediatrics-adolescent medicine in the CU School of Medicine and a Children’s Hospital Colorado physician; and Tista Ghosh, MD, assistant professor of epidemiology and interim chief medical officer for the Colorado Department of Public Health and Environment (CDPHE).

Health leaders are calling the youth use of vapor products, known as vape or e-cigarettes, an “epidemic of nicotine addiction,” leaving teens at risk for long-lasting effects of exposing their developing brains to nicotine. The risks include nicotine addiction, mood disorders and decreased impulse control.

Sass said she sees firsthand evidence of vaping among her youth patients, and notes that even children in elementary school are reporting experimenting with vaping. She said misconceptions abound that vaping products are not as harmful as cigarette smoking.

One in four teens vape. “The aerosols in many of these electronic nicotine devices are equally harmful, both to the user and bystanders who are exposed to the vapors,” she said. “These are pollutants and can contain harmful chemicals including carcinogens and heavy metals.”

The executive order also makes suggestions for the Legislature to consider, including:
Sass said it’s important for health care providers, as well as parents, to talk with youth and their families about the health risks of vaping. Colorado has made great strides in curbing cigarette use in Colorado, she said, and “it’s going to take a similar multifaceted approach to address the issue of vaping.”

Ghosh said more than one in four of Colorado high school students use vaping products and almost half have experimented with them. “When our kids experiment with vaping, they think they are just using flavored water,” she said. “What they don’t realize is that almost all vapor products sold in convenience stores contain nicotine.”

Studies indicate that vaping might be an indicator for other high-risk behaviors, said Ghosh, who is an adjunct assistant professor in epidemiology for the Colorado School of Public Health. “Teens in Colorado who vape are more likely to binge drink, use marijuana, use prescription pain not prescribed to them, and engage in other risky behavior,” she said.

Hickenlooper said the nation-leading rate of teen vaping is not a distinction Colorado wants to have. “I think it would be foolhardy and irresponsible if we didn’t address this … Like so many challenges we’re trying to address with a holistic approach, we need to educated family members, friends and make sure policy makers and the whole community understands what this means.”

Immediate actions of the executive order:
Hickenlooper said, “We want to say with one voice: Put down the pods; trash the pens; and live a little.”