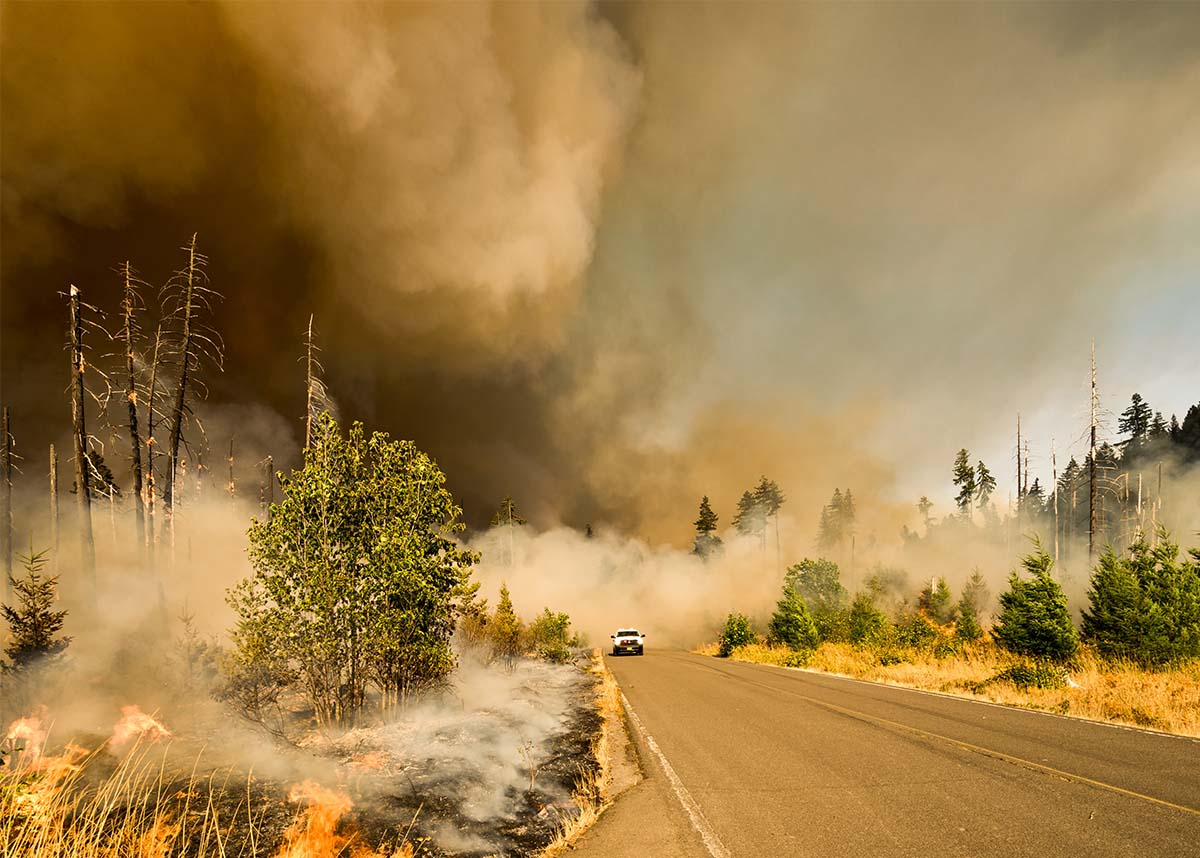 It started with the wind. Ripping across the plains on the morning of Dec. 30, 2021, gusts over 100 mph made for an unusual Colorado weather day just before the new year.

But around 11 a.m., the winds fueled a spark near Marshall Road and Highway 93, morphing it into a random, chaotic blaze that stormed across rolling hills into Superior and Louisville. From inside the inferno, smoke and ash blotted out daylight as the flames raced eastward, threatening ever more homes.

Just six hours later, over 6,000 acres had burned and almost 1,100 homes and businesses were consumed by the fire. People were missing, and a life was lost.

Snow fell the next day as a plume of questions arose: How did these northwest suburbs, whose roots extend to Colorado’s mining heritage, become the scene of the state’s most destructive fire?

While research continues into the Marshall and Middle Fork fires, CU Anschutz experts offer insights into what is happening to our weather systems, how fires impact our health and how we train the next generation of health providers in the wake of such a disaster.

Unprecedented dry conditions – including the latest first snowfall on record for the Denver-Boulder area – and winds over 100 mph are indicators of what Jay Lemery, MD, emergency medicine professor at the University of Colorado School of Medicine, secondary faculty at Colorado School of Public Health, as well as the leader of the new Climate & Health Program attributes to a trend of “energizing our weather systems.”

“I think what we saw with the Boulder County fires was what our colleague Katharine Hayhoe at Texas Tech calls global weirding, where we're just going to see things that are completely unprecedented and beyond historical norms,” Lemery said.

He points to large variations in weather intensity, such as extreme heat waves; random events, such as increased aero allergens; increases in the range of vector-borne disease; and a weather bell curve that is widening as examples of departures from weather-pattern norms.

“The fact that these winds came out of nowhere, hit a spark and leveled a thousand homes is something that I don't think anyone would've predicted,” Lemery said. “But it's illustrative of an ecosystem that is dysregulated and that is going to continually surprise us with things that have no historic precedent.”

On top of the mental toll and devastation, weather-driven crises such as the Marshall Fire have the potential to have larger repercussions on human health, Lemery said. “A lot of this is our imperative to educate our patients and say, ‘Hey, this is a risk. It's important.’”

While forest and rural grass fires are not uncommon in Colorado, urban fires of this magnitude are rare. Health effects of these building-destroying blazes are different, and studies are lacking.

Jonathan Samet, MD, MS, dean of the Colorado School of Public Health (ColoradoSPH), said the health concerns from the Marshall Fire are similar to those firefighters face.

“If you think about all the different materials – plastics, metals – there's a real potential to generate a lot of chemicals because of the high heat,” Samet said. “This makes for a very different mix of combustion products than just the grasslands burning.”

“The fact that these winds came out of nowhere, hit a spark and leveled a thousand homes is something that I don't think anyone would've predicted.” – Jay Lemery, MD.

Samet, who has studied the health effects of wildfires, said respiratory issues are the chief health concern. Hospitalizations and emergency department visits due to asthma, respiratory infection and chronic obstructive pulmonary disease are regularly seen in the short term during and after a wildfire, he said.

Particulate matter (PM) – a mix of solid particles and liquid droplets that are released into the air during a wildfire – are known for leading to short-term health impacts.

Alison Bauer, PhD, associate professor and interim chair in ColoradoSPH’s Department of Environmental & Occupational Health, researches polycyclic aromatic hydrocarbons. These are chemicals found naturally in coal, wood, oil and other substances that tend to be released during both urban and wildfires.

While there isn’t much known about urban fires and the resulting downstream effects on pulmonary or cardiovascular health, Bauer said, particulate matter is a chief concern. And the size of the particulate matter plays a role in how it interacts with the human body, she said.

With larger particulates, nasal sinusitis issues – where the particles don't get too deep but irritate and cause some inflammation in the nose – is common, Bauer said. “I think everybody's probably experienced that over the last couple of years.”

The ultra-fine particulate matter is the most potentially toxic, because it can affect other parts of the body, such as the lungs, heart and kidneys, she said. “Particulate matter at 2.5 PM and below (a single strand of hair is 30 times larger than the largest fine particle) is going to get very deep into the lungs.”

That’s when macrophages, part of the body’s immune response, try “eating” those particles, Bauer said. With extended periods of smoke exposure, the macrophages become saturated and can’t respond further. When the self-cleaning effectiveness of the respiratory system is reduced, those ultra-fine particles remain in the body, possibly causing more chronic effects and inflammation.

People with underlying heart and lung disease, such as asthmatics, are most at risk – especially children, older individuals with chronic conditions, and those with an outdoor-oriented occupation.

Training the next generation of healthcare providers to respond to climate change and disasters such as the Marshall Fire is imperative, and CU is taking the lead, Lemery said.

“There are just so many threats that we're going to see from climate change that'll be insidious and put our patients at risk,” Lemery added. “So it's no different to me than issues of smoking or any of the grand public health issues that are out there like smoking, obesity, gun violence, suicide prevention – all these things affect everyone.”

The time to act on this approach, particularly after the Marshall Fire, is now, he said.

“It's not going to be fixed when a patient shows up in the emergency room as a consequence of this. It's going to be fixed right now as we make, again, these smart policies on resiliency throughout our economy and our communities and healthcare systems."

While many challenges lie ahead, Lemery remains dedicated. “For me, it's easy work to do, because there's no question of how important it is.”