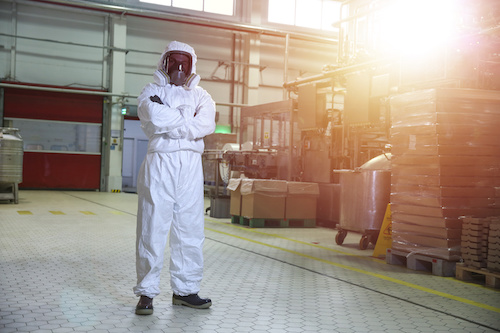 Dr. Lee Newman, Director at the Center for Health, Work & Environment based at the Colorado School of Public Health, has researched one element on the periodic table—beryllium—and its effect on worker health for more than three decades. Beryllium is a lightweight metal often used to manufacture aerospace technology and everyday goods, from golf clubs to bicycles. Exposure to this element’s dust, even a minuscule amount, is toxic. Beryllium can cause a range of serious health issues, including an incurable lung disease called chronic beryllium disease (CBD).

Newman first began his research on this toxic metal in 1985, during his fellowship in an immunology laboratory while training to become a pulmonary physician. After diagnosing a worker with CBD from Rocky Flats, a nuclear weapons production facility in Golden, Colorado, Newman began investigating a test of the body’s immune response to beryllium in large groups of workers. The work branched into studies of the clinical course of the disease, its treatment, beryllium exposure levels, ways of protecting workers from exposure, and studies of how genetics and immune responses relate to the disease.

Years of his and his colleagues’ research uncovered that the Occupational Safety and Health Administration (OSHA)’s exposure limit for beryllium exposure was not safe. In fact, it was ten times higher than what Newman and his colleagues found to be a safe level. Key contributions to our understanding of the exposure risks, and links to genetic factors, were made by Dr. Mike Van Dyke, Associate Professor at the Center for Health, Work & Environment.

Newman first wrote to OSHA in 1999 to request a temporary protective standard (which OSHA rejected), testified before congress, published more than one hundred peer-reviewed papers, trained dozens of researchers and clinicians, and worked directly with businesses handling beryllium to protect workers from exposure to hazardous levels of the element. As early as 1991, Newman and his team had field-tested an immunologic assay to detect CBD, called the beryllium lymphocyte proliferation test (BeLPT). That test is now used internationally as the gold standard for clinical diagnosis and screening workers for early disease.

Relying on this research and that of others around the world, and responding to calls from industry, labor unions, public interest groups, academia, and medical professional organizations, OSHA passed an updated exposure limit in 2017 to protect workers from beryllium. The rule reduced the exposure limit by ten times the previous levels and introduced important protective measures.

On July 13, 2020, OSHA published a final rule revising the beryllium standard for general industry. The rule includes changes “designed to clarify the standard and simplify or improve compliance” to better protect employees.

According to the official statement made by OSHA:

The compliance date of this final standard as modified is September 14, 2020.

According to OSHA, the final standard will affect approximately 50,500 workers employed in general industry and is estimated to yield minor net cost savings to employers. Research by Newman and others indicates that far larger numbers of workers will be protected by this standard.

“Thirty-five years ago, I would have never imagined that I would invest half of my life protecting beryllium workers, contributing to a branch of scientific research called ‘immunotoxicology,’ and pushing OSHA to promulgate a new protective standard,” says Newman. “But I’m really glad I did. The legacy of this work will stop thousands of workers from developing an incurable, totally preventable illness. I’m proud of the team that has contributed to this achievement.”

Dr. Newman continues to share his research expertise on beryllium with policymakers, the media, fellow scientists, and his students. Contact us for more information.