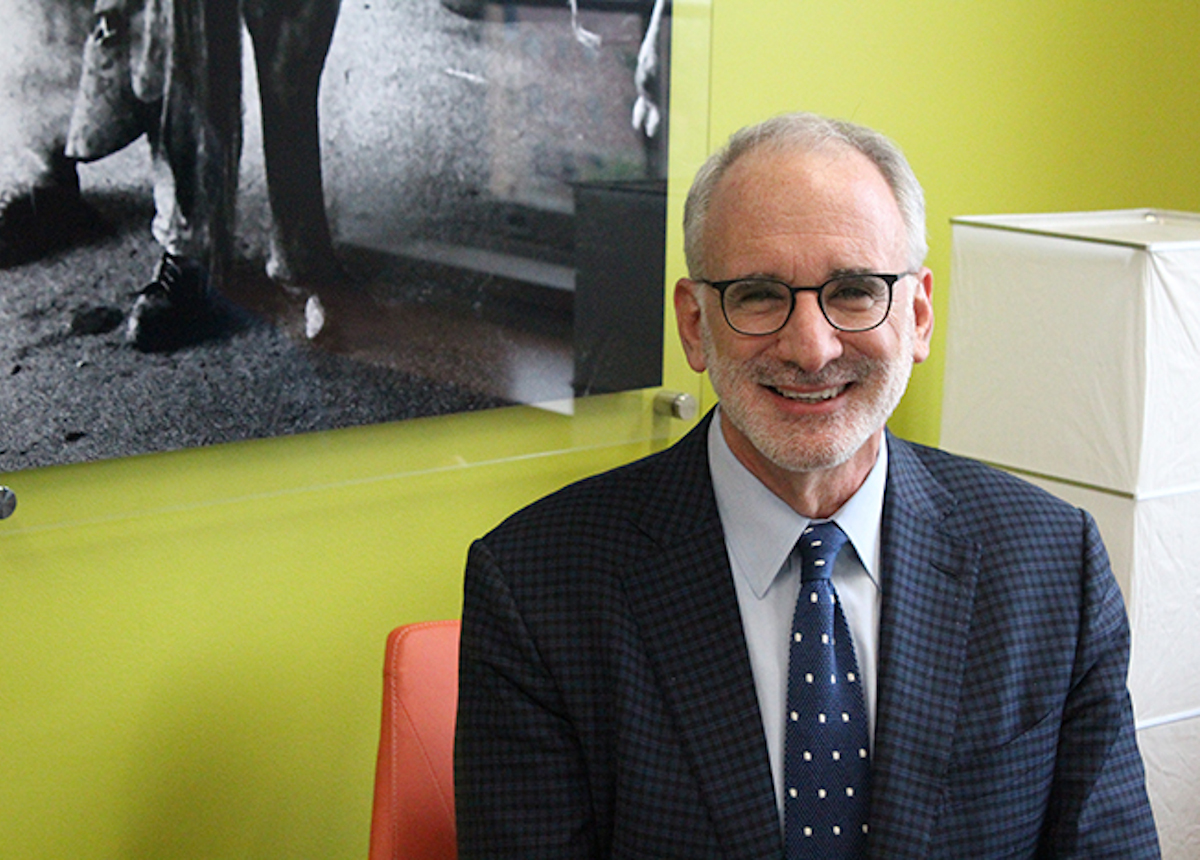 Lee Newman’s career has been a series of “aha!” moments that have guided him across every stage of the public health spectrum. These individual moments have built upon each other to scaffold a career that led Newman to being named a Distinguished Professor by the University of Colorado Board of Regents this year—the university’s highest honor.

Newman remembers reading about strange clusters of cells in the lungs called non-caseating granulomas in a pathology class in medical school and wondering how they got there. Several years later, these granulomas popped up again when he was a University of Colorado pulmonary fellow. “I became interested in how the immune response was functioning in the lung, and I wanted to understand these clusters of cells in particular…I went into the library and came out a month later with a research proposal,” he recalls.

Newman was specifically interested in granulomas as they related to a disease called sarcoidosis. His idea was that if he could create a mouse model of granulomas, he could use it to better understand what was happening in people with sarcoidosis. To create these abnormal clusters of cells, he looked to an element that had been identified as a cause of granulomas decades before: beryllium. Beryllium is a metallic element used in parts for nuclear weapons and reactors, non-sparking tools that can be used near flammable gases, transistors, semiconductors and windows for X-ray tubes. If he exposed mice to beryllium, he could induce granulomas and then use them to study sarcoidosis.

Beryllium disease was first identified in the 1940s among workers in a fluorescent lamp plant in Salem, Massachusetts and was dubbed “Salem Sarcoidosis”. A similar lung disease also started to pop up in those working on nuclear weapons as part of the Manhattan Project, and Alice Hamilton, the first female professor at Harvard University, and her student Harriet Hardy identified beryllium as the culprit in both workplaces. They started a registry of cases of beryllium disease, begging doctors around the country to send them cases and case histories. By the 1960s, word began to spread that the problem of beryllium disease was being taken care of, supported by the fact that doctors were referring fewer and fewer cases to the registry. In reality, the drop in number of cases wasn’t because there were actually fewer cases, but because the registry had stopped being advertised. The “eradication” of beryllium disease was less so a prevention success but more so a surveillance failure.

Newman wasn’t aware of this when he began work on his mouse models in the 1980s. He trusted the literature that said beryllium disease was under control. His interest was in sarcoidosis, and beryllium disease was just a vehicle for his model. A mentor suggested that he look for patients who had been diagnosed with beryllium disease decades before and study their blood again simply to understand more about sarcoidosis. It turns out he didn’t need to look far. A patient and metal machinist named “Tom” came into the clinic with a previous diagnosis of sarcoidosis. Newman asked Tom if he worked with beryllium, and “his jaw just about fell and hit the exam table,” Newman says. That was the first “aha!” moment: when he saw one person with beryllium disease in his clinic, the rules of public health told him that other people were also being exposed and likely had the disease as well. Now it became his job to both find those people and prevent others from experiencing the same fate.

In the late 1970s and early 1980s, doctors in Ohio had developed an experimental blood test for beryllium disease. They piloted their test on local beryllium workers and were able to detect an immune system fingerprint in people who had developed an allergy, or sensitization, to beryllium. Back in Colorado, Newman was trying to improve this test so he could use it to confirm beryllium disease in his mouse sarcoidosis models. Once he saw Tom, he started using it in humans as well. Tom worked at Rocky Flats, a nuclear weapons manufacturing complex in Golden, Colorado, which led to another “aha!” moment for Newman: “I realized that not only should we use this blood test as a way of screening people who come into our clinic, but we should be going out into the workforce to use it as a screening test for early disease in the community of workers who are exposed to beryllium.” Earlier beliefs that beryllium disease had been all but controlled were due to a failure of surveillance. Newman wasn’t going to let that happen again; now, beryllium surveillance would be more active.

It’s not easy to go into a manufacturing plant and propose screening employees for an occupational health hazard. Newman and his partner, Kay Kreiss, had another major “aha!” moment and went to talk to the medical director of Rocky Flats. They explained that one of the workers had this disease and that thousands of others were at risk. The medical director was on board, then they got the United Steelworkers Union on board, and finally they needed to talk to the Department of Energy, which ran Rocky Flats. “There was a period of time where there was a lot of effort to try to discredit what we were doing, to make us just go away, to not allow the study to happen,” Newman says. The head of Environmental and Occupational Health at Rocky Flats stepped up to give Newman and Kreiss research funding despite the opposition. He knew he was responsible for the workers, and he needed to know if their health was being affected. In the first 50 metal workers they studied, Newman and Kreiss identified five who had already developed an allergy to beryllium. All five would eventually be diagnosed with beryllium disease.

The next step was to expand the study. Newman and Kreiss asked for funding from the National Institutes of Health that allowed them to study even more workers and provided yet another “aha!” moment. It wasn’t just the machinist and metal workers who were developing a sensitization to beryllium. Roughly 2% of workers at Rocky Flats were sensitized, including secretaries and security guards that had exposure to beryllium that was well below the OSHA permissible exposure limit. By the late 1980s, Newman and his colleagues knew that what the government considered a “safe” level of beryllium wasn’t safe.

Newman could have stopped there. It would have been easy to say that the identification of the problem and the science of its mechanisms, genetics, and immune responses was his purview, but he’ll tell you he has an overdeveloped sense of injustice that meant seeing patients with a preventable and incurable illness made him angry. He brought in trainees to learn from him, who then went on to establish their own labs, asking their own questions about the effects of beryllium. Other researchers began replicating his team’s work, finding similar rates of disease in other industries where beryllium was used. Newman helped build a community of scientists who were interested in the problem, including mentees like Dr. Andrew Fontenot (SOM), Lisa Maier (National Jewish Health) and Mike Van Dyke (ColoradoSPH) who have further advanced our understanding of beryllium exposure, immunology and disease prevention. At the same time, he recognized that talking about beryllium within the research community wasn’t enough—they had to communicate their findings back to the industry and to policymakers. He served on committees for the U.S. Department of Energy, one of the largest consumers of beryllium, to help develop a policy for DoE facilities that reflected the scientific realities of beryllium exposure. The policy went into place in 1999, 10 years after they first discovered the magnitude of the beryllium problem at Rocky Flats. He also advocated for the Energy Employees Occupational Illness Compensation Program Ace (EEOICPA) that was passed in 2000, providing financial compensation for nuclear weapons production workers who developed illnesses due to occupational exposures.

Around the same time, he wrote to the head of OSHA to explain that the current permissible limit wasn’t actually safe, people were getting this disease, and something had to be done. He was ignored at first, but the community of scientists he had created, with the help of public advocacy groups, piled on, and in 2001, OSHA decided that they would begin work on a new standard. That policy finally went into effect in 2018.

He’s taken the screening tools he worked on out of the clinic and into the community to discover the epidemiology of the disease.

He’s used the understanding he and others gained to change regulations, pass legislation and get compensation for victims, and now he’s assessing the efficacy of those regulations.

In some ways, Lee Newman’s story of beryllium disease is the story of public health and health science. He’s ready to close this particular book, though, and entrust it to the people he’s trained and mentored over the years. In 2005, he traded his patients for students and left National Jewish Health to join founding ColoradoSPH Dean Richard Hamman in getting the new Colorado School of Public Health off the ground. He’s been working in the area of Total Worker Health and created a NIOSH Center of Excellence where they’re trying to understand how to help small business owners do a better job of addressing the health and safety of their workers. He’s studying an epidemic of kidney disease in agricultural workers of Central America that reflects the dire consequences of changing climate and environmental exposures on worker health. Even with all that, he’s most inspired by continuing his role as a mentor.

“At the end of the day, I only want to work on things that are high-impact, meaning that we can make a difference now for hopefully millions of people who are our most vulnerable for preventable health conditions,” Newman says. “And my impact is doing the best I can to mentor the next generation of people in public health who can learn from what we’ve done here, what I’ve gotten to do, and they can do it better.”

Lee Newman was named a University of Colorado Distinguished Professor on September 13, 2019, reflecting his exceptional performance in scholarly work, excellence in the promotion of learning, and outstanding leadership and service to the profession and to CU.