Should I get another COVID booster? Six common questions answered

Official nod for 50 and older raises queries: Why 50? Why now? What if I had COVID? 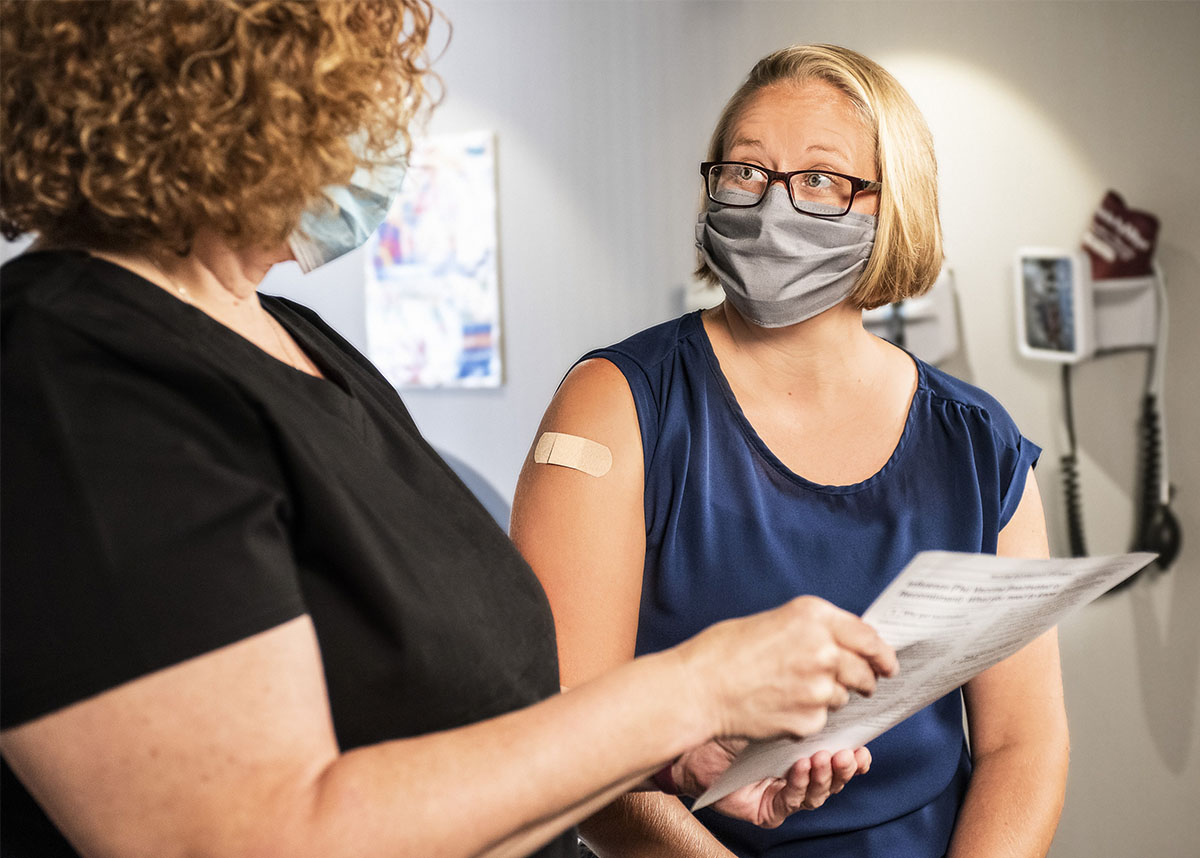 Americans 50 and older who are four months post-booster shot received the green light last week for COVID booster No. 2. An unexpected age drop combined with a receding threat of infection have some people in the approved group asking questions before rolling up their sleeves for a fourth time.

The Food and Drug Administration (FDA) recommendations cover the Pfizer-BioNTech and Moderna vaccines and include authorization for additional doses in certain immunocompromised populations.

A newly launched COVID.gov offers a portal to sign up for vaccine appointments at pharmacies and clinics across the country as well as updated information on accessing treatments, testing and high-quality masks.

“First of all, make sure you’re vaccinated and boosted,” Lisa Miller, MD, MSPH, of the Colorado School of Public Health (ColoradoSPH), said before answering questions about the new move. “We don’t want to lose sight of that message.”

Half of the American population still does not have a first booster dose. And in Colorado, more than a quarter of the high-risk, 65-and-older population still lack that third dose, Miller said. “Those people are really putting themselves at risk,” she said, as the first booster dose dramatically improves survivability over the initial two-dose series. “That’s where we are really going to lose people.”

Ross Kedl, PhD, professor of immunology & microbiology at the University of Colorado School of Medicine, joined Miller in answering top questions they and other experts are hearing about the new recommendation.


Setting the age for an added booster at 50 raised questions, particularly among those who have surpassed the five-decade mark but remain healthy and fit. Unfortunately, those fit and 50 are relatively few.

“Many Americans 50 and older have underlying medical conditions that put them at risk for more severe outcomes due to COVID,” Miller said, explaining why the FDA likely chose age 50 as the cut off.

“Those people are really putting themselves at risk.” – Lisa Miller, MD, on the people not vaccinated with a third dose, or first booster.

That list of risky conditions grows with the science as the pandemic persists, moving beyond medical conditions such as type 2 diabetes and lung disease to dementia, smoking, being overweight, not exercising and having substance abuse or mental health disorders.

A simplified message by the Centers for Disease Control and Prevention (CDC) suggests that people 65 and older, regardless of health status, would strongly benefit from a second booster, as would 50- to 65-year-olds not in optimum health.

Age remains the strongest risk factor, with immune response to vaccines for people 65 and older less robust and the older group accounting for 81% of U.S. COVID deaths in 2020. For the younger, healthy group on the spectrum, the booster decision is less clear-cut and reverts to weighing individual risks.

“When they’ve looked at people in their 50s to 65 without the co-morbidities, the benefit they get from that fourth booster is not nearly what they get from the first booster,” Kedl said. Nor does it provide the immunity boost it renders for the 65 and older population, he said.

“But, that said, everybody gets some benefit from it. Immunity does go up for everyone in a statistically significant way.”

Why now when rates are so low?


Miller and other experts say the current ebb in the pandemic does lower the need for the healthy, fully vaccinated population to race to the nearest pharmacy or clinic for another booster. Still, both she and Kedl, who fall in that group, plan to take the shot.

“I would say, just go get the booster,” said Kedl, acknowledging that many people are questioning whether to time the shot to when signs of a next wave arise for stronger protection. “You don’t want to be part of that wave. That’s rolling the dice and doesn’t seem likely to have nearly the benefit that you think it might.”

Just as the first booster provided a longer period of immunity than the initial series, this next booster’s protection should be even longer and more durable, Kedl said.

With the movement into a less-restrictive environment, Kedl said, the chances of infection also open up. “The era in which we can expect to avoid any exposure to SARS-CoV-2 is mostly over,” he said. So maintaining high immunity remains paramount to resisting infection and becoming severely ill as much as possible, he said.

What if a better booster comes out?


Although Kedl said he would have preferred an omicron-specific booster, he would not advise waiting for one. “The reality is, BA.2 (a second omicron variant) is already taking over. And these original vaccines have done a really good job providing protection against all diverse strains so far.

Kedl also cited a National Institutes of Health study that compared an omicron-specific booster to the original booster in animal models. Unexpectedly, the variant-targeted shot did not show a statistical advantage over the original vaccine in increasing immunity, he said, at least at early time points after the boost. “The variant booster may show benefits at longer time points post-boost. But for now, this is the best data we have, and it’s encouraging with regard to the efficacy of the current vaccines.”

What if I had a first booster and COVID?
Especially with the past surge of the highly transmissible omicron, many people, vaccinated or not, have been infected with SARS-CoV-2, some without even knowing it. That raises the question of whether the natural immunity combined with the vaccine-induced protection warrants forgoing another booster.

“There’s been some good evidence, especially if it was omicron, that, yeah, you probably are pretty well set,” Kedl said. “There’s some good data that you’ve most likely got some pretty high and durable immunity on board.”

However, natural immunity has always proven more variable than vaccine-acquired immunity, Kedl said. “So the vaccine immunity so far has been much more predictable in terms of the mileage you can get out of it.”


Some questions have focused on the FDA’s booster decision being made without its advisory panel and with little data. The CDC quickly approved the FDA recommendation, also without an advisory panel.

“This gets to this idea that boosting is some novel thing that we just came up with in the world of SARS-CoV-2, like we’ve never boosted before,” Kedl said. Waiting for more studies and clinical trials is not realistic, he said.

“We don’t re-evaluate the flu vaccine every year with a clinical trial, and now that we have extensively vetted the COVID vaccines, there’s no good reason to keep doing it with them either,” Kedl said, noting an opposite reality.

“We don’t re-evaluate the flu vaccine every year with a clinical trial, and now that we have extensively vetted the COVID vaccines, there’s no good reason to keep doing it with them either.” – Ross Kedl, PhD

“We want to quickly snuff variants out, and if we have to keep re-evaluating them, we delay it enough that by the time we get a booster in the clinic, another variant is there. It would be a bit like getting your car checked by a mechanic every morning before you go to work. Sure, you might feel safer every morning, but the benefit of doing so is approaching zero, and you’ll always be late.”

Saying that she understands the concern, Miller said that, unfortunately, decisions sometimes must be made without perfect data. “But we do have a lot of experience with these vaccines. Millions and millions of people have received these vaccines. We have lots of safety data, and we know how these vaccines work.”

Miller noted that there are two studies out of Israel on the response and safety of second boosters of both Pfizer and Moderna, including one involving over 500,000 people that found a fourth dose decreased mortality for those 60 and older by 78%.

What else should I consider?


For people still not sure where they land, weighing the booster benefit can include numerous other personal factors, Miller said.

“Maybe they are in positions where they interact with a lot of people every day, or where they don’t have the luxury of working from home, or they’re in large households where they are exposed to lots of people.”

For the many workers returning to the office, it’s important to consider whether their employer has a vaccine mandate or not, Kedl said. “Those who are unvaccinated do pose a significant risk not only to themselves but to those around them,” Kedl said. “The kind of virus replication they can sustain has the highest chance of breaking through anybody else’s immune system.”

People who work with the public, cannot afford to get sick, have children under 5 or simply want to protect vulnerable people should add those factors to their pro-and-con lists.

“If I were 70 years old, I wouldn’t have any hesitation,” Miller said in regard to getting another booster. “Or if I’m over 50, and I have an underlying health condition. To me, that’s an easy decision. For others of us, it’s really a very permissive decision in which we need to weigh our personal concerns.”