Dangerous haze is back in Colorado. Get prepped for more fire days ahead. 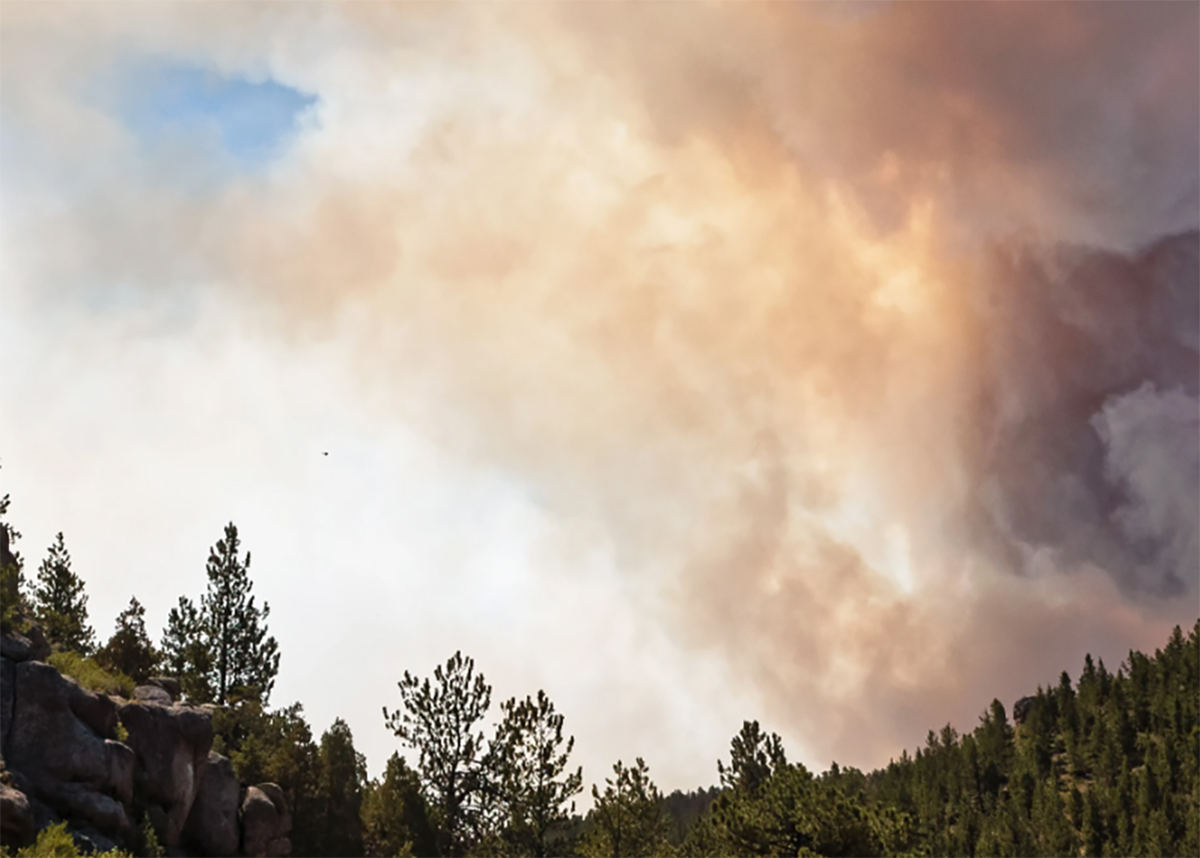 A cold front brought a blanket of snow to Colorado in late October 2020, a welcome gift for a state ravaged by wildfires. As the flakes fell, they helped tame record-breaking burns that had been threatening communities for weeks, racing from the Rocky Mountains above to the borders of Boulder below.

Although the fires still smolder, since the early snowfall, many residents have been breathing huge sighs of relief. However, health experts at the University of Colorado Anschutz Medical Campus and beyond warn: Smoke-filled skies are a part of the state’s future and need to be recognized for the health risks they bring.

“Unfortunately, the unprecedented wildfires are what everybody predicted would happen with climate change and one of the greater threats to our region because of climate change,” said Jonathan Samet, MD, MS, dean of the Colorado School of Public Health (ColoradoSPH). Samet co-authored a recent special report published in the New England Journal of Medicine (NEJM) on “Wildfires, Global Climate Change and Human Health.”

Always a danger in the West, wildfires have grown in intensity, frequency and duration worldwide, largely due to changing weather extremes, such as higher temperatures, more powerful winds and increased drought. “They may become the new reality,” said Samet, a top global expert on air pollution and tobacco control.

‘When you can’t see the mountains’

While wildfires present an immediate threat to lives and homes, they also emit huge plumes of smoke, casting an eerie darkness over many Colorado communities in recent weeks and spewing numerous minute particles into the air.

“There are all sorts of elements that are hazardous to the human lung in wildfire smoke,” said Jay Lemery, MD, professor of emergency medicine at the University of Colorado School of Medicine. “And they spread out over tens of thousands of square miles,” Lemery said.

Tiny particulates, carbon monoxide, nitrogen oxides and volatile chemicals are some of the pollutants invading residents’ lungs and bloodstreams from the state’s wildfires. Studies analyzed by Samet and co-authors spanning the last 20 years strongly suggest that living amid the plumes increases health risks, from deadly heart attacks to more-severe cases of influenza and COVID-19.

“When you can’t see the mountains, and visibility is down, that’s three, four, five times past the EPA standards,” Samet said, describing an all-too-common scene along the Front Range this fire season. “Certainly, you don’t want to be out trail-running.”

The researchers found a consistent link between high-particulate fire days and increased death rates from any cause. However, the NEJM report noted large gaps in research on wildfire smoke and specific adverse health outcomes, with authors emphasizing the need for more scientific focus.

As an emergency physician at UCHealth University of Colorado Hospital, Lemery did experience an upsurge in patients during the fire season likely related to the smoke, but it’s not something that is tracked, he said.

“I see those patients for asthma, Chronic Obstructive Pulmonary Disease (COPD), chest pain or shortness of breath,” he said. “So that’s what the chart reflects. We don’t write in the chart that it was a poor air-quality day. The data are very difficult to tease out.

Lemery and others on campus are working to sharpen the focus on the field of climate change and health. He is director of the Climate & Health Science Policy Fellowship, a first-of-its-kind non-governmental fellowship aimed at training physicians to lead in the field, and associate director of the CU Consortium for Climate Change & Health.

Along with consortium Director Rosemary Rochford, PhD, and the support of the CU School of Medicine, Lemery is helping to build a new Climate Change & Health Program on the CU Anschutz Medical Campus.

‘That pushes them over the edge’

Lemery and Samet have no doubt the health effects exist. “You’re being exposed to an environment with basically inflammatory agents,” Lemery said. Effects can range from the less serious – hoarseness, scratchy eyes, runny noses, sore throats and swollen lymph nodes – to the more serious life-threatening events, he said.

“When somebody goes into respiratory distress because their underlying lung condition has been exacerbated by wildfire smoke, that’s a real palpable health effect that pushes them over the edge,” Lemery said.

In fact, the authors of the NEJM report suspect wildfire might be even more dangerous than urban pollution, which is clearly linked to poor health outcomes, Samet said. Their review found a clearly stronger effect on the risk of asthma-related events with wildfire particulate matter and cited reasons the plumes could be more toxic, including:

“Fire smoke is more complicated,” Samet said. Everything from the age of the smoke to the distance traveled to its fuel source changes its makeup, he said. For instance, smoke from a forest-laden backcountry blaze will contain a different mix of toxins than smoke from a burning residential community, he said.

With climate experts predicting intense fire seasons will persist without significant change, more studies on both acute and cumulative effects of exposure to wildfire smoke are crucial, Lemery and Samet said.

“There certainly are linkages,” Lemery said. “Elements of wildfire smoke are known carcinogens. That’s not a mystery. I’d say climate change is in our future. And until we start to make meaningful inroads into adaptation and mitigation, which certainly in the United States we haven’t seen much of that, these conditions are only going to get worse.”

With links to everything from pre-term birth to poorer COVID-19 outcomes, wildfire smoke is a public health issue that needs to be addressed, the researchers said. “Plain and simple: It’s a health risk,” Lemery said. “So just looking at it like that, that being outside could be hazardous to your health, is important.”