The Centers for American Indian and Alaska Native Health are housed in the Nighthorse Campbell Native Health Building (NCNHB). This building is a truly unique and very special place—special to the campus and Native communities.

After years of effort by the project oversight committee, chaired by Spero Manson, PhD, and the project design team, design and construction of the NCNHB was completed in August 2002. The project design team was headed by M+O+A Architectural Partnership of Denver, Colorado. Because of the many unique cultural aspects of the project impacting the overall space and building design, the firm of Medicine Root, Inc. was also engaged. The ground building ceremony for the $10.4 million dollar facility was held in June 2000, and construction of the three-story, 50,000 square foot facility was completed in August 2002.

In addition to the program office and support space necessary to house these programs, space in the new facility includes a rotunda (great hall for ceremonial and program events), the Shore Family Forum with capacity to seat 100, the ceremonial plaza, and other meeting spaces. 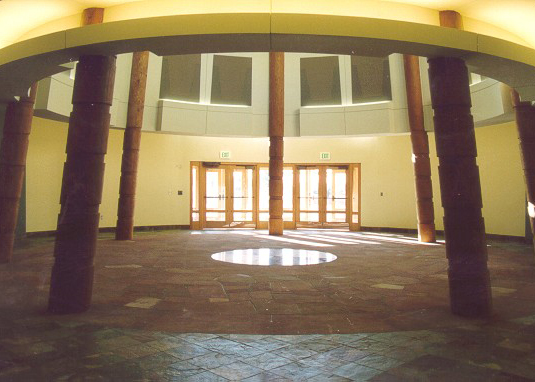 The design of both the interior and exterior space celebrates the Native American belief that the 'circle' represents the dwelling place created by the Great Spirit for all people. As a result, circles play a major role in the architecture of the facility. Circular forms are repeated to form the interior rotunda, the exterior council ring and the Shore Family Forum. A fragment of a circle is even used to define the overall shape of the entire building.

Since the earth-sky orientation is an important part of the Native American culture, even the primary public spaces are oriented in a special fashion toward the axis lines of the winter and summer solstices. The overall building form reflects similarity to a grassland butte found in this region of Colorado. The building entry, facing to the east, exposes the building's rotunda to the exterior and also aligns with the sun's solstice.

The buffalo culture is expressed mostly in the rotunda and exterior plaza areas. The rotunda is the most dramatic space in the building and provides an interior gathering space for ceremonial activities for building users. A fragmented tipi form is used for the rotunda and reflects the influences of these local nations in the building design. Framing the rotunda and extending through all three floors are seven Douglas Fir logs. Reminiscent of the lodge poles that support the plains tipi, they symbolize the seven teachings of our Grandfathers – love, honor, respect, courage, honesty, reciprocity and family.

The Medicine Wheel at the center of the rotunda floor represents the four sacred directions and nations of Man – the colors of which are red, white, black and yellow. Colorado fieldstone surrounds the Medicine Wheel. Inset around its perimeter are the blessing stones, etched with the names of key participants in the June 2000 Ground Building Ceremony that preceded construction. The rotunda skylight is also a nighttime feature emitting light while defining the building and its entry.

Exterior to the building on the eastern side is the ceremonial plaza. The plaza is enclosed by yet another circle - an arbor structure that is a reinterpretation of the council ring, forming the ceremonial space within. Its opening is also to the east, thus establishing the eastern entrance traditional to Native American dwellings. A seating area adjacent to the entry plaza expresses the concept of a broken circle, saying that indeed nothing is perfect. An exposed area of earth at the center of the exterior council ring is symbolic of the connection to the earth common to many Native American ceremonies. The native Colorado soil in this area was mixed with soil from the four corners of the United States during the Building Dedication Ceremony in September of 2002.

Native American art has been incorporated throughout the building interior and exterior. Niches and wall space for art are available both inside and outside. Currently, a collection of Native American woven baskets and historical photographs graces the exhibition space.