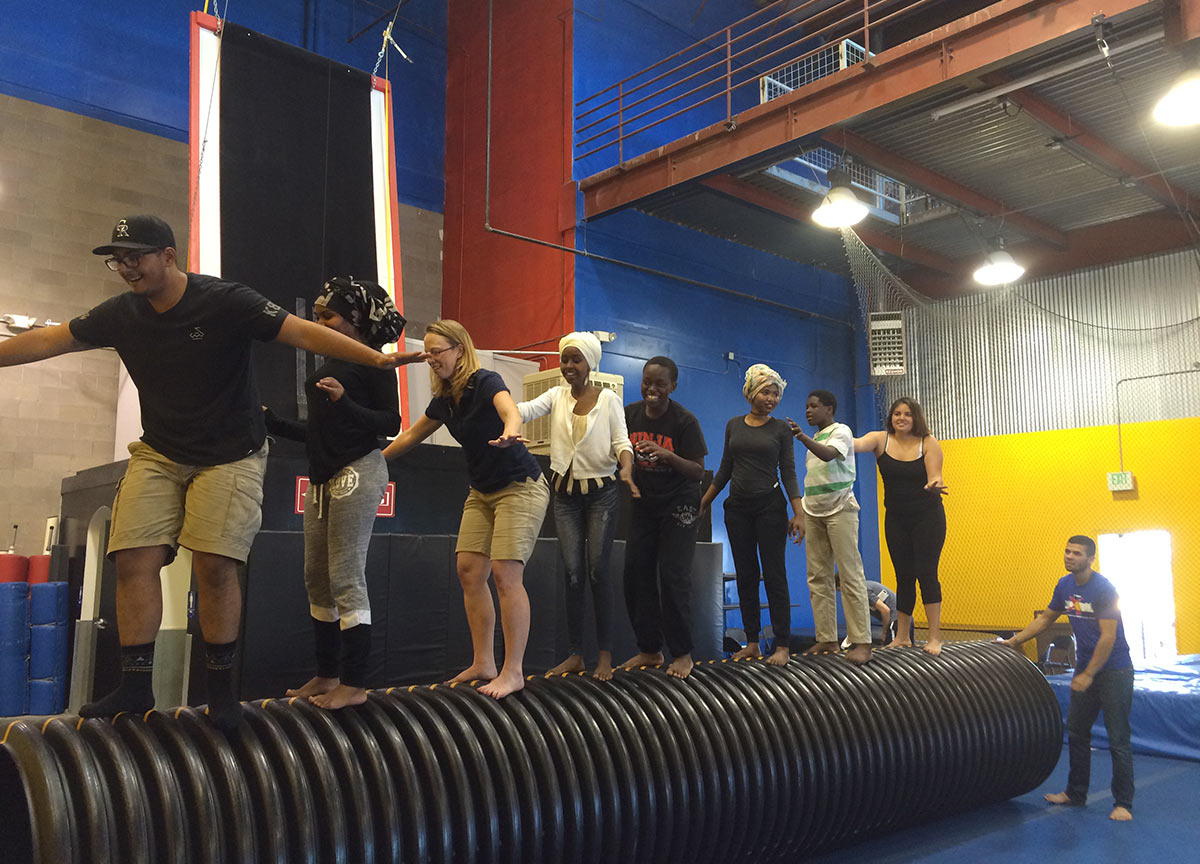 Heather Kennedy is the Youth Movement Project Manager in the Center for Public Health Practice. An MPH alum (Community and Behavioral Health, ‘10) and recent PhD in Social Work, she oversees two grants that engage young people in social action programs. The first, UpRISE, focuses on tobacco control. The other involves adolescents in rural areas of Colorado in an arts-based conversation about mental health. From the time she applied for her first public health grant at the age of 17, Heather has been passionate about developing platforms where young people feel empowered to speak up and change their worlds.

What brought you into public health and got you interested in amplifying the voices of young people?

“My mom passed away when I was 15. She had severe mental illness and was in and out of either psychiatric hospitals or jails most of my life. She weighed 80 pounds when she died, because instead of eating, she smoked three packs of cigarettes a day. At 17, my counselor recruited me to be involved in this movement called Get Real. She told me it would help me get into college. I got involved and was told that my voice mattered and that I didn’t have to wait until I was 21 or 35 to make a difference; I could make a difference right now. I could change the world if I wanted to. I could make things better. I could make it so another person didn’t have to lose their mom to substance abuse and mental illness. I committed my whole life to ensuring that young people get their voices heard and addressing substance use and mental health issues. I was involved in that movement from age 17 to 27. Then, the money went away in tobacco control as a result of the fiscal crisis [of 2008], and the Get Real program closed its doors. I was at a loss, wondering what I would do with myself now that something that had defined who I was for ten years, something I believed in so deeply it hurt, was going away. I needed a job, so I started working at Children’s Hospital in 2009 doing research on creative arts therapies, and I ended up becoming really passionate about it.  I still missed working with young people, so I ran a teen board that did arts-based social action around mental health. I was also providing a lot of technical assistance to adults on how to work with young people, and it made me realize that so often, adults get put into roles in which they’re working with young people but they have no skills in it. When adults lack the skill, then young people don’t get engaged authentically, and we perpetuate a power imbalance. I decided to go get my PhD so that I could be a tool to better support adults so they can engage young people well.”

Obviously, tobacco and nicotine use in adolescents is a huge topic right now. What do UpRISE and the as-yet-to-be-named mental health project bring to conversation that we might not have heard before?

I’ve always wanted to work with young people from a power-sharing perspective, but often there’s no overt acknowledgment that power is operating due to the identities we hold. Our race, our gender, our class background, educational background, our age, these are all things that bring in power, and we’re working to acknowledge them and disrupt them. We talk about power, privilege and oppression, specifically with young people who have been pushed to the margins, who have felt like their voices have been silenced, who are not part of traditional public health or education efforts, who are not the traditional leaders that you might think of when you want to recruit kids to a program. These are young people who might be using those substances or are experiencing mental health challenges. They might have been involved in the criminal justice system. We really want to talk about power, not just if something comes up, but starting conversations about how certain identities in our country have been given more access to power or unearned advantages. We’re naming that and not trying to sweep it under the rug. No topic is off the table in UpRISE.

Power kind of underwrites the whole UpRISE movement, we start with understanding individual power or the collective power that we can create. Then, we move onto the tobacco industry and how they’ve abused power. We talk about debt bondage in Malawi, child slavery in the United States, deforestation and how the lithium-ion batteries that are in the majority of electronic cigarettes are not being disposed of properly and are going to cause problems for the environment for generations to come. It’s never a “don’t smoke” message, it’s “I want you to know how the tobacco industry abuses their power. Do you want to support these companies?”

It’s nuanced. The goal is for young people to develop a critical awareness of things, not to tell them to do anything, because that doesn’t work. Then we move into a process called “The Five Whys”, which is a root cause analysis. We try to be thoughtful about tobacco as a symptom of a problem. In public health, we always say “we’re upstream”, but what’s upstream of tobacco use? What is driving young people to use tobacco as a coping mechanism, and can we solve the root causes of their suffering? Once they’ve identified a root cause, we ask groups to make meaning out of it, whatever that means to them. The youth coalitions engage in story circles, photovoice, videography, writing poems, or making a rap song. One group came up with a podcast series, another group did a video, and another presented to their city council.

I also think the adults in UpRISE are stepping up in tremendous, brave, and vulnerable ways. It’s a lot of personal work for them. The first time we meet these facilitators, we ask them to describe their experiences with power, privilege and oppression and to describe what power-sharing looks like. If you’re standing and everyone else is sitting, you’re holding power. If you’re in a classroom-style seating arrangement, change it up and arrange it in a circle. It’s important to acknowledge where the adult power is concentrated. We play together, we learn together, the adults can be vulnerable, the young people can be vulnerable, and we all do it together, whatever it is.”

When the young people in these programs are brainstorming the root causes they see as being upstream of smoking behavior or when you’re having these conversations about power, what kinds of ideas seem universal? What themes are coming up?

“There’s two main issues youth generally talk about. The first one is that youth have so much stress and they are expected to be amazing, but then they have people that hold them in such low regard, so there’s this kind of duality of their lives. They live in this space where they must be perfect and they’re almost nothing, treated as if they have no rights or opportunities, or that their voices aren’t being heard. After Parkland, the young people were telling me that their schools wouldn’t let them walk out, because they said they didn’t know what they were talking about, so they should just stay in class.

One thing I believe is driving youth substance use is that young people need a sense of belonging. They say that stress from social relationships or ‘fitting in’ or not feeling like there’s any place for them to go or feeling like they’re experiencing discrimination is causing their nicotine use, but, to me, one of the root causes of young people’s suffering is the lack of belonging that they feel. Lack of belonging in their homes, schools, and communities. They really want to be authentically understood for all their complexity.

They enjoy talking about “real things”. They’re eager to have conversations about power, privilege and oppression. These are often young people of color in predominately white schools, with predominately white teachers. It’s not new to them; it’s their everyday lives. They know power is operating, but no one has been real enough to talk about it. They know the system is kind of messed up, but they haven’t had all the language that we’ve helped create. So many of them say, “You’re telling me that people in my community use tobacco more because the tobacco industry is intentionally targeting me? We have so much other stuff to deal with. We’ve got crime, we’ve got police violence, and we’ve got this too?”

We’ve talked a lot about your public health practice, but you also do research and publish. What stands out to you from your scholarly work?

“At Children’s, I was doing research on creative arts therapies and I published a bunch of studies on that type of intervention. The work I’m proudest of came out of my PhD.  We reviewed the environmental outcomes associate with youth participatory action research in the US over a twenty-year span. We found that youth inquiry approaches, where children and adolescents are engaged in the generation of new knowledge about topics that are important to them, led to adult practitioners being more likely to see young people as experts in their own lives and to involve them in decision-making, as well as young people strengthening peer networks and the link between home and school. This often resulted in additions or improvements to youth services at the program and policy level. These youth inquiry approaches are having positive and lasting changes in young people’s environments.”

So, 17-year-old Heather, who has gotten pointed in this direction with a public health grant, who has figured out that her voice can matter, what does she think about what you’re doing now and the path that you ended up going down?

“I don’t think 17-year-old Heather could have ever imagined Heather to get a PhD or to be so in love with her work. Every day, I get to do exactly what I want to do. I’m very fortunate to be able to inspire people, to challenge myself, to learn, to write papers about the thing I care most about. I think 17-year-old Heather would be happy. I really wanted to be either a therapist or a teacher and I think I’m both.  I think she would be happy and also be like, “She’s so dorky.” I was really devastated when Get Real closed, and I thought I would never find something that made me feel so alive again, but I have.”