Cycling between worlds, Maddie Godby excels both on the track and in public health as she sets sights on Paris 2024 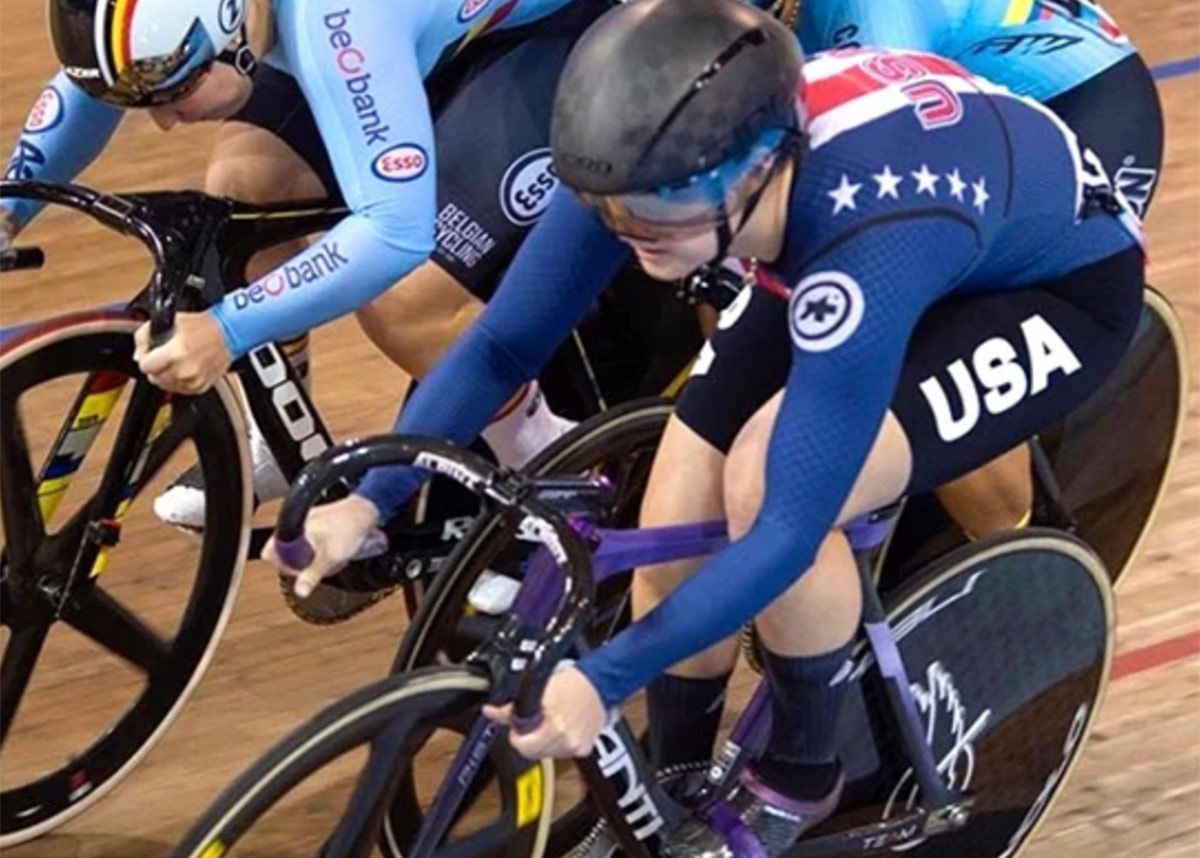 Maddie Godby, a graduate student in the Population Mental Health & Wellbeing Program at the Colorado School of Public Health, flew to her first Olympic Games this summer knowing full well the month in Japan would be unlike anything the world has seen.

The athletes, including Godby, a track cyclist who races in velodromes, would be competing without in-person friends and family, per COVID-19 precautions, in a country where the majority of the populace stood against the quadrennial event. They would need to suddenly unleash their competitive fire after a year of delays, logistical challenges and other uncertainties as to whether the “2020” Games would even happen

Perhaps not surprisingly, amid all the discombobulation, mental health vaulted to the center of the conversation. The discussion sparked early on, when star U.S. gymnast Simone Biles pulled out of her events because of mental health issues, and it continued throughout the Games.


Here, Godby, who graduated from the University of Colorado Colorado Springs with a bachelor’s in healthcare science before starting her program at CU Anschutz in fall 2020, speaks candidly about the mental health challenges of balancing an elite athletic career with academics, her aspirations in public health and other aspects of her busy life.

In the following Q&A, the Boulder native talks about having her brother at the Olympics (learn why he was allowed to attend), where she likes to go to rejuvenate (it’s not too far), the training process to get selected to the Olympic team (“It was a very hard three years”) and her favorite color (think Colorado Rockies).

How did you get into cycling?

When I got into cycling, my family had ridden pretty much since we were kids. They mostly did endurance, and I liked cycling, but I just was not an endurance athlete. Then I found track sprinting, and I was like, ‘Oh, I can actually do this.’ I compete in track cycling, and I do the sprint events. My events were the match sprint and the keirin. They are very short, very fast races.

How did you do in your Olympic events?

Just with COVID and everything, it was definitely a win to even get there, and there were definitely some impacts of that. The velodrome is obviously very location-dependent, and so to have the facilities closed, obviously, training was a little bit sub-par. So, you could see that (in the results). But I definitely didn’t do bad by any means: I got 13th and 16th in my two events. I was just really happy to be there, honestly.

I live in Colorado Springs and train at the U.S. Olympic Training Center, but our qualification races were all over the world, so it was two years of World Cups and World Championships that go into the points tally. So then with the COVID delay, that was three years, it was a very hard three years. 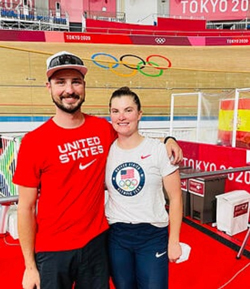 What was it like to compete at your first Olympics?

For cycling, it was very unique because the velodrome was actually four hours outside of Tokyo (in Izu); we weren’t in the Olympic Village. We had our own satellite village, and for us it was always going to be more like another cycling race. So, I didn’t get to experience the village or anything, but because we were outside of Tokyo, we were actually allowed to have spectators, and it was kind of unique. But just to be there, to have it happen; I think everyone was relieved that (the Games) went ahead.

What was it like having that long of a gap between actual racing events?

We’ve done it so much that you just kind of go back on auto pilot, like, ‘Oh, I know how to do this kind of thing.’ But it was great to feel that adrenaline and everything again. When you first got there, it was kind of a shock to the system. But then you were like, ‘Ok … calm down. I know what I’m doing.’

When did you discover a passion for sprint cycling, and were the Olympics always a goal?

I didn’t really start cycling competitively until I was 17, so I was kind of a late-comer to the sport. Then I found the velodrome within a year, so I’ve been pretty much track-only my entire career. I’ve been racing for 11 years at this point.

(The Olympics) wasn’t a goal at first, and then I was kind of like, ‘Oh , I’m actually talented at this.’ And then I found that I enjoyed the hard work, the training and just focusing on that process. In that, I created the goal and the dream of going to the Olympics. (The Olympics) wasn’t a childhood goal of mine, like some of the other athletes. I’ve been on the U.S. Cycling team for about six years.

I like physical activity and the nutrition side of it, and I just didn’t want to go into an elite sport as a career. So, I found it interesting to do studies at a population level, because it allowed me to combine what I love but also have a greater impact. The ability to have a greater population impact is why I chose public health.

I was supposed to enter (the ColoradoSPH Masters in Public Health graduate program) after Tokyo (in 2020) and then, obviously, with the delay (from the pandemic), I was balancing grad school and training for the Olympics for two semesters. I’m an online Population Mental Health & Wellbeing Program student.

In an Instagram post you mentioned the COVID disruption, saying the pandemic threw you an academic ‘curveball.’ How so?

Yeah, that final Olympic preparation is really stressful, and all you have energy for is training and doing the things like nutrition, recovery, sports medicine. So, it just gets really intense. And then to have to do that and school, when I was expecting to go into school after (the Olympics), it was just a re-shuffling.

But, obviously, everyone had to do that in the pandemic. It turned out that having school to get away from cycling for a little bit was also, I think, a blessing in disguise as well.

So, mentally, that’s a break for you at this elite level – occasionally getting away from your sport?

Yeah, it’s just a lot of pressure (to compete at this level). To get away and have something else to think about, something else to focus on, is important. Also, there’s the aspect of working toward my post-athletic career; because, I think, that was a huge thing about mental health at the Olympics.

Mental health was just a really big theme for Tokyo, and I think COVID exacerbated it. A lot of athletes struggle when they’re finished competing. They don’t know what to do because their sport is their life – it’s everything. And so that helps a lot, too, to work toward something I can go into after (athletics) and have those plans.

What are your post-college aspirations in public health?

I really like community health programs. I like health equity, but honestly, I’m just getting through school and seeing what I find (of interest) in school. I don’t know what I want to do, specifically, but providing more access at the community level to prevent adverse health outcomes is really interesting to me.

You have an interest in the Rocky Mountain Prevention Research Center. Tell me about that.

Last semester, in spring of 2021, I volunteered on a pilot garden program in their early childhood education classrooms. It was with their Culture of Wellness in Preschools program. I wanted more public health experience, and … they gave me some skills. I found it rewarding to do something that provides a tangible impact to a program that can help kids.

Your brother was on an Instagram post with you in Japan. Was he part of the U.S. Cycling team in some way?

Yes, he’s a staff member for the national team. He does bike mechanics. Because our families weren’t allowed to go and spectators weren’t allowed (aside from cycling events), to have someone there to share (the experience) with was really special.

We obviously know each other very well, so working together is easy. We don’t have to say a lot of words to get stuff done, and so it was almost like I just had a really supportive teammate there who I could count on to get my equipment ready. It’s just a really well-oiled machine, I guess, working with my brother.

What will you carry forward from the challenges you’ve faced over the past two years?

I think flexibility. That was a theme for everyone, but certainly you can’t control (events). We didn’t even know if Tokyo was going to happen even with just a couple months to go, and so you just keeping training, but you’re also thinking, ‘I don’t know if it’s going to happen.’ So, just greater flexibility, and knowing you can get through it – even if it’s hard.

Also, I think a greater emphasis on mental health. Obviously, that’s my (academic) concentration, but as an athlete, it was so important. And I think in Tokyo, with a lot of the prominent athletes like Simone Biles, there was a really big conversation about it. And then in public health, with COVID and all the pandemic’s disparities and negative impacts, I think just mental health really combines everything for me.

Do you plan to compete in the 2024 Olympic Games?

Yeah, we’re back into qualifying for Paris 2024 beginning of the spring, because it’s a two-year process. I’m going to school part-time … so it’ll probably be a four-year (graduate) program for me instead of a two-year program. I’ll probably graduate right around Paris (Games).

What activities do you like to do for your own self-care outside of cycling?

Being a Colorado native, I really like getting up into the mountains. That’s something I don’t get to do a lot because of my competition and training schedule. Getting a chance to explore the mountains is a really nice escape for me.

I see you go by the nickname ‘Purplewatts’ on the U.S. Cycling team. What is the significance of purple?

(Laughs). Purple is my favorite color. It’s something someone coined about me – just my love for purple, and so now it’s kind of my motto. It’s definitely an identifier. I have purple shoes, my helmet has a purple racing stripe and my own cycling kit when I’m not racing for the national team is purple, so there’s definitely lots of purple.