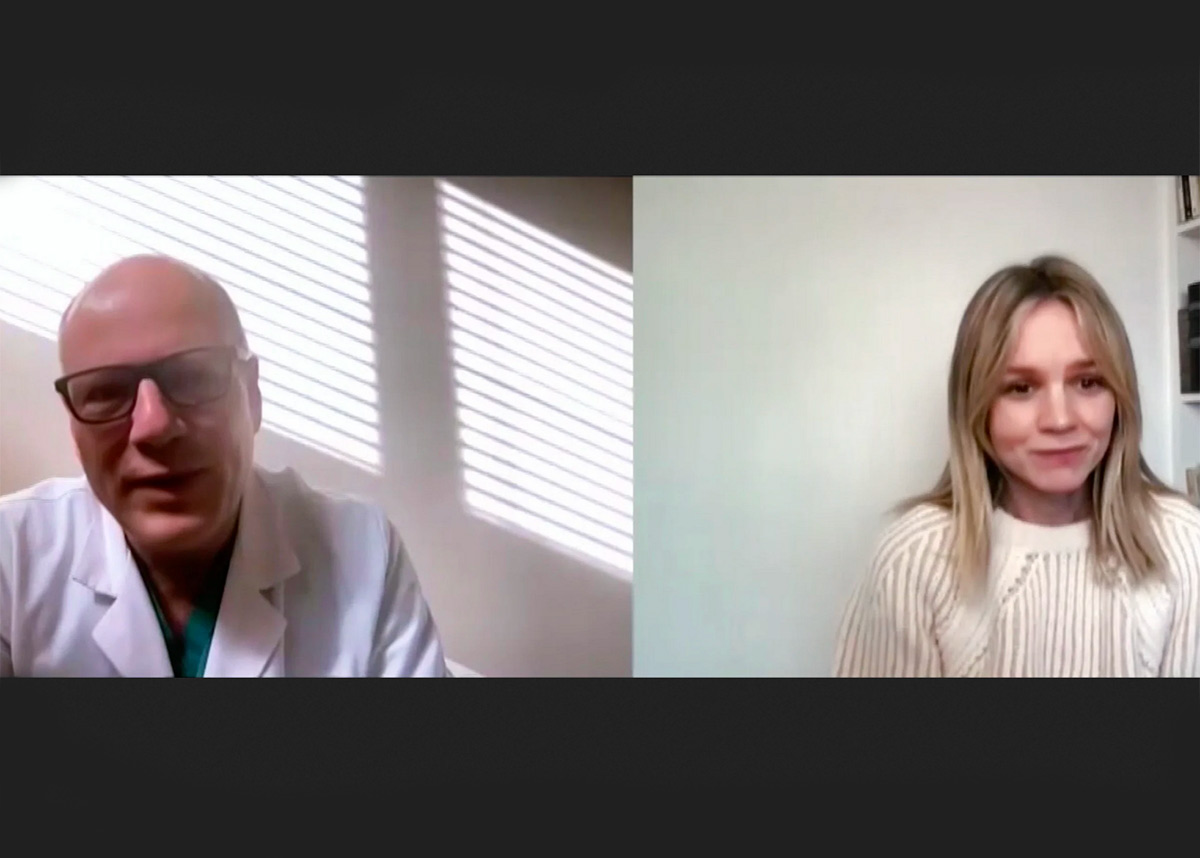 When Carey Mulligan complains to Fernando Holguin, MD, during a Zoom office visit about a persistent feeling of living in a time loop, the veteran doctor’s medical sleuthing skills kick in.

“Well, let me ask you a question,” Holguin says. “Have you tried to murder Andy Samberg again and again, and he just won’t die?”

Another successful diagnosis in the books.

The scenario, which poked fun at the time-looped-based 2020 film “Palm Springs,” wasn’t real. But the doctor playing one on TV was.

Holguin is a critical care and pulmonary disease specialist at the University of Colorado School of Medicine on the CU Anschutz Medical Campus. The good-natured doctor took a brief break from his teaching students and treating COVID-19 ICU patients to join a tribute to the pandemic’s medical heroes on the 78th Annual Golden Globe awards on Feb. 28.

After his brush with stardom, Holguin, also a professor of epidemiology and director of the Latino Research & Policy Center in the Colorado School of Public Health, spent some Zoom time with CU Anschutz Today, recalling the comic acting experience and sharing what fuels the passion behind his work.


First, how did you land this acting gig? Have you been secretly moonlighting as an actor?

No (chuckles). Somebody at the University of Pittsburgh where I used to work is friends with one of the producers. And they were looking for physicians, so my name was passed along. Good luck (pauses). I guess.


Did you Zoom rehearse with Carey Mulligan, or did you just have to shoot from the hip, so to speak?

No. They contacted me, and I said, yes, I’ll do it. And a few hours later, they sent me some lines. The next day, I was in a Zoom meeting with some producers and some technical people, and then Carey Mulligan showed up. And, of course, I was super nervous. Then we went through our lines. We only took two takes. And then she said thank you for all of your work, and I said I love some of your movies. She was very polite and very nice.


And how would you say you did? Are you aiming for a Golden Globe award of your own now?

No (laughs). I think I’m going to stick to pulmonary medicine. But I think it went well. When I was watching it in my house, I was like, oh no (covers his face with his hands), I don’t want to see it. But I’ve received a lot of comments from friends and family. Of course, they are biased, but they thought I did a good job.


You have been working among the sickest of COVID-19 patients from day one of the pandemic in Colorado. When looking back at this past year, what strikes you the most about this illness and the toll it has taken?

Often, you know the ones who are going to get really sick, because they have comorbidities and risk factors. But we’ve seen a number of people without any significant risk factors end up either getting severely sick or dying. It’s been striking. The other thing is seeing how long it’s been for some of them to recover, those who do survive. And then the thing that left a major impression on my mind is the suffering from families and patients in isolation. I think it’s taken a toll on the nurses and the staff and the physicians. People are emotionally drained.


How would you describe your medical students’ reactions and motivation as they found themselves working to complete their education during a pandemic?

The medical students have been great. I think for those who were on clinical rotations, they really stepped up to the plate and really, I think, had to mature to become doctors very quickly, probably a lot more quickly than some of them thought they would, and take on some serious responsibilities.


Early on, you and your fellow healthcare providers were quite struck by the disparity you were seeing in the COVID-19 ICUs. What stands out about what you have learned regarding the disease’s tendency to affect patients of color more severely?

It’s quite striking. There’s really been quite an enormous disparity in how the virus affected some of these populations. And nobody knows the exact reason, but I think a lot of it has to do with individuals from these underrepresented minorities are people who are working the frontlines in grocery stores and transportation, so they are in contact with a lot of people. And many of them live in crowded spaces and multigenerational homes. And I think its lack of access to adequate information. All of those factors come into play.


In fact, you are dedicating a great deal of time beyond the ICU, helping to close some of those equity gaps. Can you share what you are doing in the community?

The group that I work with, the Latino Research & Policy Center in the Colorado School of Public Health, has been really actively engaged with the community, disseminating information and talking to other Latino-serving organizations to try to bring adequate information to the communities. The other thing we’ve been working hard on with these groups that are affected the most is more rapid and more broad access to vaccination. UCHealth has been doing a great job of coming to the communities and trying to get the vaccines where they need them the most.

What have you found to be some of the main causes of vaccine skepticism or hesitancy in the Hispanic/Latinx community?

For one, it’s lack of trust in the system, and there’s also a lot of fear. Whether they are documented or not, given prior political policies, people are afraid to come out. They are afraid of having their names used. And then there’s also a language barrier. And then there’s kind of a wait-and-see approach. You know, I want to just ride it out for a little bit and see how other people do, and that’s the worst thing you can do. You want to get vaccinated immediately as soon as you can do so.


How do you help alleviate these fears?

I think we have been delivering information, through channels that people trust and with the messages in Spanish, to these communities. These are people who are not going to have a My Health Connection. You really have to talk to people. Many of them don’t even have phones or access to internet, so we need to help schedule the vaccines.


Why are you putting so much time into this vaccination effort outside of your already incredibly busy days of caring for patients?

Well, you know, I’m an immigrant like many of the Latinos here, and I feel their pain. I see them in the hospital, and in the ICU, and I feel like, you know, we all have to just do a little bit extra to what we do on a day-to-day basis to make things better for people.


One final, but important, question: Are you going to stick with us or move to Hollywood?

I’m engaging in multiple conversations with some agents (laughs). But I think my future is still in medicine.