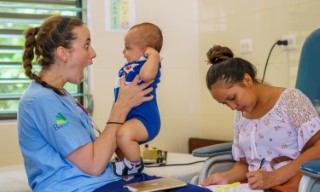 On a typical scorching hot day in the rural Trifinio region of Guatemala, you might find Saskia Bunge-Montes, MD, MPH, checking a child for malnutrition or monitoring a pregnant woman. Or she might be traveling dusty dirt roads in a motorized three-wheel tuk tuk to meet members of the community. Or she could be skyping with her colleagues at the Colorado School of Public Health at the University of Colorado Anschutz Medical Campus.

For Bunge-Montes, a 2016 graduate of ColoradoSPH, the best part of a typical day is that it’s not typical at all.

“I can’t describe a typical day because no two days are the same,” she says.

Bunge-Montes is Director of Community Programs and Education for the school’s Center for Global Health and their Center for Human Development, the University of Colorado’s first international public-private partnership in collaboration with ColoradoSPH and other schools of health on the CU Anschutz Medical Campus, Children’s Hospital Colorado, and AgroAmerica.

A Guatemalan native, Bunge-Montes earned a Doctor of Medicine degree at Universidad Francisco Marroquin in 2015, then came to ColoradoSPH to complete a certificate in Global Public Health in 2015, and a Master of Public Health in 2016 with a focus in maternal and child health. She was one of the first recipients of the Celgene Global Health Fellowship in ColoradoSPH’s Center for Global Health, which is designed to fund international students in low- to middle-income countries who come to the United States for public health training.

“The Celgene fellowship is specifically for capacity building and it was made for people from countries like Guatemala, who were very adamant that they wanted to go back to their country of origin,” she says. “What sometimes happens is that people come to the U.S. to get trained in higher education and there’s a brain drain on their country of origin because they want to stay. They were looking for candidates who were very willing to go back and share their knowledge in their home countries.”

For Bunge-Montes, there was no question she would return to Guatemala. A daughter of an educator mother and a pediatrician father, she has strong ties to her country. She is part of a large family, including 23 first cousins, who live close to each other in Guatemala City.

“Growing up, I had a very fortunate childhood in that my dad was a professional and I lived in the city,” she says. “But I got a lot of exposure to Guatemala itself because the city is like a bubble. If you only live in the city and don’t look around, it can be a very developed place, but once you leave the confines of the city and spread out, you see you’re in a developing country.”

She said her parents exposed her to the less affluent parts of Guatemala by taking her and her siblings to community centers and through the outreach work her dad did as a physician.

“It’s such a vibrant and culturally rich country,” she says. “You have 23 different languages in a country that’s a fourth the size of Colorado.”

But it was also frustrating for Bunge-Montes as a medical student. She saw how a lack of services, education, and clean water negatively affected the health of Guatemalans who were treated for medical problems that could have been prevented.

“In Guatemala, it’s all about curing people with different sicknesses, but it’s never about preventive health or education—that’s why I decided to focus on public health,” she says.

A Journey to Rural Guatemala

When Bunge-Montes returned to Guatemala, she went to work at the Center for Human Development operated by the school’s Center for Global Health on a banana plantation in rural Guatemala. Work on the center began in 2011 with a $1 million grant from the Jose Fernando Bolaños Foundation, run by the owners of AgroAmerica, a major Guatemala banana grower, along with financial support from Children’s Hospital Colorado.

The goal of the center was to provide health care services for the 3,000 plantation employees, as well as the more than 20,0000 residents of the local community. These families often face diseases, malnutrition, maternal pregnancy complications, and other issues related to poverty, poor sanitation, and a lack of health care services.

Three years later, the clinic opened a family clinic and a community prenatal nursing program. The program paired traditional birth attendants with nurses, so deliveries can be shifted from the home to the local hospital. A birth center recently became operational.

In addition to the birth center, Bunge-Montes has supervised a community-based program that focuses on mothers, pregnant women, and children. Nurses enroll women early in pregnancy and follow them through birth and the first three years of the child’s life, providing health, development, nutrition, and hygiene education.

Bunge-Montes “is incredibly dedicated to the public health mission” and she’s been able to take the knowledge and experience that she gained in the Colorado School of Public Health back to her home country, says Stephen Berman, MD, FAAP, director of the Center for Global Health. “Because of her interpersonal skills and her ability to relate to the staff and community people and the Ministry of Health, she has been incredibly productive in building sustainable systems. She’s really been essential to our success there.”

Berman says the providers there have made childbirth safer, by treating mothers with complications and getting them to the hospital. They’ve also made strides in successfully treating infections in children and reducing neonatal mortality.

“It’s been very personally gratifying to see the community engagement and how the Guatemalan staff has taken ownership and leadership in the whole process,” he says. “It’s not our project, it’s their project and that’s the goal.”

The biggest challenge is how to expand what we have learned in the Trifinio clinic that would allow other communities to benefit, he says.

“We know how to train people, but we need to establish more of an integrated collaborative relationship with the Ministry of Health and local universities to take what we’ve learned to scale,” he says.

Bunge-Montes used her public health training to carry out geographic information system (GIS) mapping of the area. She recruited a local pastor and four students to help her interview the area residents to get a picture of who they were and how they lived. Although they had collected good data from clinic patients, they had never done an overall study of the people who lived in the area. Many were migrants, who came to work in the banana or palm oil plantations.

“We had been working in Trifinio for about three years without really knowing how many people were there and their ages,” says Bunge-Montes, adding that her interviewers visited 4,500 homes and had 97 percent participation from area residents.

“We were getting not just the physical location of the people, but also what types of food they had access to, what they drank, what type of sanitation services they had, and how many kids were in each house,” she says.

They found households with up to 12 people living there. Fewer than 50 percent of those interviewed had access to clean water and many lived with uncovered latrines, a breeding ground for disease. Teen-age pregnancy was also a big problem.

Based on the data, Bunge-Montes and her team looked at a variety of interventions to improve the health of Trifinio residents. They implemented a sex-education course called Big Decisions, based on a Texas program, and tweaked it to fit the cultural needs of Guatemalan teens.

“We trained a local teacher, creating capacity in local schools,” she says. “In terms of sex education, these kids didn’t know anything. And the parents wanted to know what we were teaching their kids and that helped us educate them on family planning methods and STDs.”

Her mapping research on area families also helped obtain approval of a National Institutes of Health study, in which researchers at ColoradoSPH, the CU Anschutz Medical Campus, and the Baylor College of Medicine will work with Guatemalan investigators examining the long-term brain development of children infected with the Zika virus.

The mapping project identified that there were more than 500 newborns in the area—enough babies to complete the study on the three-year timeline. Researchers will also look at the effects of the dengue and chikungunya viruses, also transmitted by the mosquito that carries the Zika virus.

“Saskia’s work and documentation were instrumental in showing the NIH we could enroll enough participants to do the study,” says Berman, adding that recruitment will take place through the Center for Human Development.

“This is a very complicated project that has many blood draws and follows patients very closely,” Berman says. “The fact that our mapping project had a 97 percent participation demonstrated to the NIH that our community engagement process was very successful, and our relationships were such that we would be able to carry out the study.”

Bunge-Montes finds that her patients often face tough barriers to getting the health care they need. Even though their clinic costs between a dollar and $1.50 for an appointment, money can be an issue for patients. They also struggle to afford prescriptions—even though they are necessary. Finding transportation to the clinic can also be a problem for residents who live on the outskirts of the area.

“Recognizing when they need to seek care—we teach that a lot,” she says. “We show women what is normal and what isn’t normal in their pregnancy and with their baby, so they know when to come to the clinic. We don’t want moms to wait too long before they seek care.”

Educating the community has worked. When Bunge-Montes first started working in the clinic in 2014, she saw one or two patients each day. Today, 25-30 patients seek care on a daily basis.

Says Bunge-Montes, “It was really cool to see that transition from being unknown and outside the community to trusted providers today.”

She’s reminded of a 42-year-old patient who gave birth to her tenth child at the clinic.

Her younger children were small and malnourished, giving providers an opportunity to help the mom learn about the importance of good nutrition. The mom also was grateful to learn about an implanted birth control device because it was dangerous for her health to have additional children.

“We were there at the right moment to deliver her baby and get to know the rest of the family,” she says. “It was a precarious situation, but now months later the younger kids are doing well and the nurses are following up with them. We were able to avert a crisis because of our great system.”