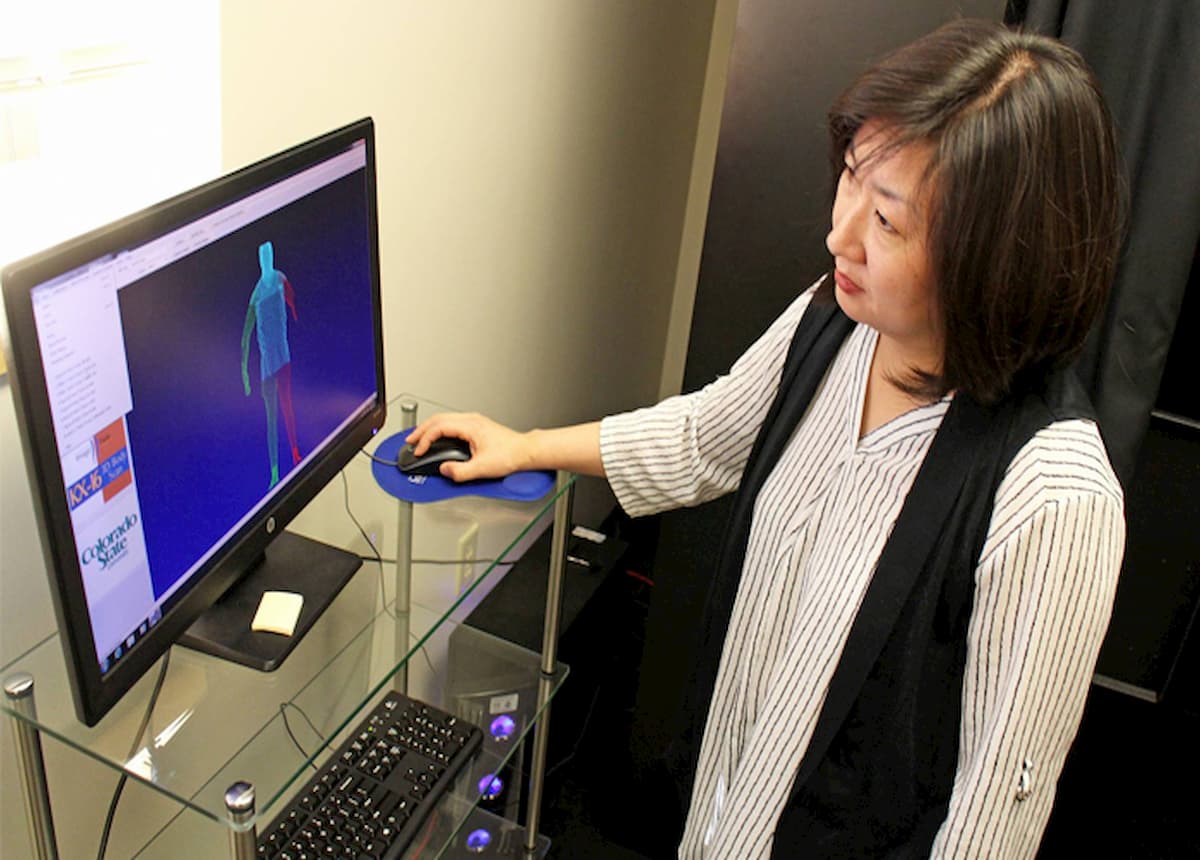 Though Dr. Juyeon Park has devoted much of her professional research to studying how humans use technology – focusing more on the human aspects than on designing the technology itself – she still didn’t anticipate the “Eureka!” moments and, sometimes, tears that came when young women truly saw themselves.

As participants in Park’s 3-D imaging project, the young women – freshmen at CSU – had avatars of themselves created from more than 400 data points. Then, their avatars were digitally dressed in different outfits and placed in various environments. And it turns out they looked… normal. Those shoulders she always thought were so huge? Nope, just regular shoulders. That swimsuit she avoided, seeing nothing but imperfection in her body? Actually, she looked good. She looked happy on the beach.

Park, a faculty member in the Colorado School of Public Health at CSU Physical Activity and Healthy Lifestyles concentration and an associate professor in CSU’s Department of Design and Merchandising, has guided aspects of her research on how humans use technology toward body positivity. This has included not only the project with CSU students, but a partnership with the Bariatric Center of the Rockies in Fort Collins to work on body image with people who have had bariatric surgery.

“A lot of people who have negative body image tend to focus on ‘problem’ areas,” Park explained. “This research emphasized looking at the whole body. We’re seeing that body image is not always about the physical body.”

During the Body Positivity Project, completed with CSU freshmen, participants attended four educational sessions that included discussing the media’s impact on body image, writing a letter to themselves, having a clothing exchange and making T-shirts with body-positive messages.

“A lot of participants said, ‘I’m realizing I’m not the only one who feels this way (about my body)’,” Park said. “It was really important to hear others’ perspectives and understand that they’re not alone.”

From the initial pool of participants, a randomized group was selected to have virtual avatars created in the Human Dimensioning Facility, which Park co-directs. Participants stood in a small booth and had their bodies scanned so researchers could gather more than 400 data points and create virtual avatars. The first avatar was more generic, to help them get used to seeing a body of their general size in different outfits. The second avatar looked like them and was placed in recognizable virtual environments, including CSU campus.

Park said that the avatar experience was not for everybody and that it needs to be approached carefully, “but the emphasis is for participants to love themselves, become more affectionate with themselves, to see themselves in their environments and feel good about it.”

“I would love to see the results of this project to be applied in schools,” said Kyndrick Peachey, a junior studying apparel merchandising and working with Park and Ogle on Project Embrace. “I think it’s important for young girls to be taught about body image and I would love to see this research used to help build young girls’ confidence.”

Jessica Shaver, a second-year graduate student studying the relationship between mass-produced custom women’s apparel consumers and sustainable consumer behaviors and also working on Project Embrace, said, “I would love for Project Embrace and the experimental intervention to have a positive impact on people’s understanding and acceptance of their own bodies. I think the VR technology being used is an exciting field that I hope more researchers will incorporate for the purpose of improved mental health and self-acceptance.”

Park said she sees virtual reality technology used for body positivity as having a lot of potential within populations of young girls, breast cancer survivors, LGBT youth and adults and others.

Written by Rachel Sauer for ColoradoSPH at CSU.