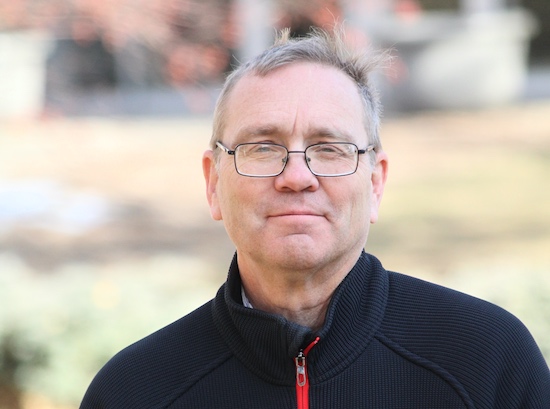 There is a box full of hats in the corner of his office. There is a shimmering yellow fish, a horned Viking helmet, a foam moose head with antlers, a giant taco, and many more. On any given Zoom meeting or lecture, you will see Dr. Tom Johnson cycle through a few of these quirky accessories without skipping a beat. He likes to keep things interesting.

For Johnson, it all started on a trip sponsored by the U.S. State Department back in 1992. One of the Russian scientists Johnson was collaborating with on the trip recommended that he study under Dr. Herman Cember. In the cafeteria at Northwestern University, Johnson met with Dr. Cember to discuss health physics. Their scheduled lunch turned into a two-hour conversation and Johnson enrolled in the health physics program not long after. Health physics, also referred to as the science of radiation protection, is the profession devoted to protecting people and their environment from potential radiation hazards.1 From the onset, Johnson had a great interest in how the integration of health physics with other disciplines created such broad opportunities.

Johnson is now a professor of Health Physics at Colorado State University (CSU) and has served as the program director for the NIOSH-funded Mountain & Plains Education and Research Center (MAP ERC) health physics program for the past 13 years.

A distinguishing factor of Johnson’s health physics program that sets it above the competition is the real-life, hands-on experiences trainees receive. Johnson is eager to return to his cherished trips to Idaho National Labs and Los Alamos National Labs. “We missed taking students to the labs during COVID and I can’t wait to get back. The last time we went, we toured five reactors, which I hope we’ll do again. They have also been doing a lot of work with plutonium 238 so I expect we'll hear about that as well,” says Johnson.

Jan and Jim Johnson (no relation to Tom) started the CSU health physics graduate program in the 1960s and began taking students to Idaho and Los Alamos National Labs. These trips were discontinued in the 90s, but when Johnson became the new program director, he knew he had to resurrect them.

“These trips are brilliant because they give students the opportunity to talk one on one with people who are doing professional health physics,” says Johnson. “They give trainees a chance to see where they would be practicing and what they would be doing. We also have alumni at both locations who are wonderful in setting up mentorships and internships. Students tell me ‘Wow, it didn't feel like we went on a tour, it was more like a job interview.’”

These trips expose health physics students to the interdisciplinary nature of occupational safety and health that the MAP ERC is founded on. On the trips, health physics students learn that it's not just radiation they need to worry about in these labs. “They see that there are ergonomics issues, heat stress issues, chemical issues,” says Johnson. “There is a whole host of hazards out there, we can't just look at radiation in isolation—we have to consider holistically what is out there and the other MAP ERC students and faculty really help drive that home when we go on these visits.”

Into the uranium mines

Johnson is also eager to take his trainees to uranium mines in Wyoming to continue their interdisciplinary experience. The MAP ERC health physics program has a history of working with the Navajo Nation in New Mexico which has multiple abandoned uranium mines on their land near the Four Corners. There were uranium mines that started in the 1940s as part of World War II and the mining operations continued until about 1970. What is left are open holes in the ground and areas of elevated radioactivity which are major physical hazards.

“The overburden, which is the dirt that was dug to create the mine and is set aside, often has radium in it which emits radon,” says Johnson. “Little is growing on top of it because of the dry climate, so dust can suspend radioactive particles and spread this contamination throughout the Nation.”

Johnson has previously worked with the Sweetwater Chapter of the Navajo Nation to help people understand the health risks and to take measurements of the radiation and contamination in the surrounding area. “One of the things we learned is that their water is frequently contaminated with heavy metals,” says Johnson. “Drinking water is hard to come by in the area so we fear that many people are drinking untreated water and consuming animals that drank from the contaminated water.”

“We now assume that we need to examine everything because radioactive material and heavy metals can accumulate in different organs,” he says. “Again, this is a multi-disciplinary problem, it’s not just about radiation.”

For all of his field trips, Johnson has his own set of hard hats to protect him and his students in the field. However, a new addition of a rhinoceros hat would be very welcome to his collection since Johnson is collaborating with Dr. James Larkin at the University of the Witwatersrand on a project aimed at protecting rhinos from illegal poaching.

A staggering number of rhinos are poached worldwide (approximately 1-2 per day) for their valuable horns. The Rhisotope Project is working with veterinary scientists and health physics to determine how much radiation they can inject into a rhino’s horn to ward off illegal poachers without affecting the health of the animal. According to Johnson, “A rhino horn is like a fingernail. Dr. Larkin is currently verifying that there is no communication between the upper horn and the vascular system so there will be no way for radioactive material in the horn to enter the rhino’s body.”

The most current iteration of the project is exploring whether injecting a radioactive nail (which is fairly cost-effective) into the rhino horn will be enough to deter poachers and contain the radiation. A MAP ERC health physics alum is currently working on this project.

Always recruiting… even at Best Buy

The health physics program is the most diverse, between race, ethnicity, age and gender, among all six of the MAP ERC training programs. “Our main goal is to always get the most qualified people and the diversity just comes along with that,” says Johnson.

Recruiting interesting individuals to the health physics program is a way of life for Johnson. “I am always searching to find the right people for our program,” he says. “I'm in Best Buy talking to a stranger and giving him my business card;  I'm at the Health Physics Society meetings; I'm talking to high school students; I'm talking to our alumni trying to get them to recruit others.”

Johnson has made a consorted effort over the years to recruit from Historically Black Colleges and Universities (HBCUs). He has built lasting relationships with faculty and students in this effort and been a part of the story of bringing more Black scholars into STEM.

If the hats, national labs, open mines, and rhino horns are not enough to draw you to this program, perhaps the promise of an impactful graduate degree is. “Our Master’s and Ph.D. programs prepare students for a professional career in health physics. We want students to understand the theoretical underpinnings of everything they do.”

Thanks to the impact of his trips, teaching, and the MAP ERC program, Johnson anticipates greater collaboration among professionals based on their greater awareness of multidisciplinary hazards, all with the goal of “students and alumni working together to improve worker health.”

Written by Laura Veith, marketing and communications coordinator for the Center for Health, Work & Environment at the Colorado School of Public Health.