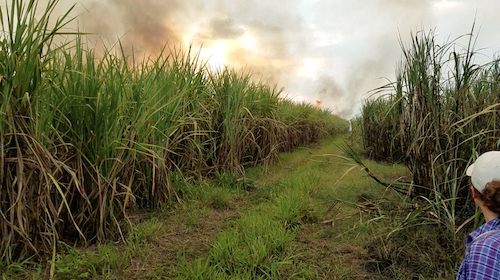 Agua, suero, descanso y sombra. These words hang on the wall of the sugarcane company clinic in Santa Lucia Cotzumalguapa, Guatemala. The sign translates to water, electrolytes, rest, and shade. Lyndsay Krisher, however, is not in the clinic. She is out in the field coordinating a team before they begin their field research with sugarcane workers. The team, based at the Center for Health, Work & Environment at the Colorado School of Public Health (ColoradoSPH), is seeking to better understand Chronic Kidney Disease of Unknown Origin (CKDu), an epidemic that is affecting agricultural workers throughout Latin America.

Based on their findings, the team offers recommendations to agricultural businesses to address CKDu risk factors and implement Total Worker Health® approaches to support worker health and well-being. Since launching this research in 2015, they have conducted health screenings on thousands of workers.

How did Krisher go from a small, rural town in Connecticut, to the humid, smokey sugarcane fields of Central America? Having been bit by the travel bug at a young age, Krisher made the connection that only 17-year-olds starting college can make: I want to travel internationally, I should therefore major in international relations. After studying two semesters abroad and graduating from the University of Delaware, Krisher moved to China to teach English for a year.

In the 10-million-person city of Taiyuan in China’s Shanxi province, about a 12-hour bus ride west of Beijing, Krisher’s interest in environmental science began to emerge. Taiyuan is in one of the major coal-producing provinces in China and was once listed among the top ten most air-polluted cities in the world. Living there was Krisher’s first exposure to pollution on that scale, imprinting black and sooty in her mind. 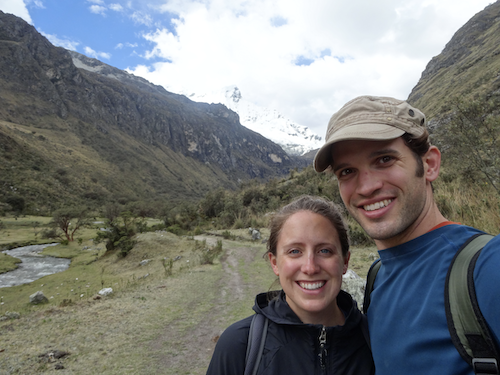 She returned to the U.S. and began working for a financial firm in Philadelphia. She migrated out west to Colorado in search for something new. “I knew I wanted to go back to school and was interested in the health sciences,” says Krisher, “but knew I didn't want to go into healthcare. I discovered public health. It appealed most as a great way to have an impact without becoming a clinical provider.”

While working on her MPH through the ColoradoSPH, Krisher found herself in the office of one of her professors, Dr. Lee Newman. And as is common with Dr. Newman, if you enter his office, you are likely to leave with a job at the Center for Health, Work & Environment (CHWE). Krisher worked as a professional research assistant managing pilot programs, assisting with research, and helping develop provider education to address the opioid epidemic.

Going south of the border

Soon after graduating, Krisher was bit by the same travel bug. Promising to return, Krisher left CHWE for South America with Jesse, her now-husband. After six months backpacking in Peru, she and Jesse joined a team of researchers and collaborators from the Ministry of Health in Machala, Ecuador, and launched a research study to improve community surveillance of dengue fever.

“The Ecuador experience kind of fused my interest in environmental health and global health,” says Krisher. When they decided to come back to Colorado, Krisher took a job at the Center for Global Health (CGH) back at the ColoradoSPH. She spent a little over a year working with the Center’s Trifinio project, a community-based clinic and research center located near several banana plantations in southwestern Guatemala.

In partnership with Dr. Newman and CHWE, the CGH team began doing health screenings for banana workers and found that some of the workers showed evidence of having reduced kidney function. “I had seen a couple of articles about the CKDu epidemic in agricultural workers in Latin America,” says Krisher. “That screening was part of the impetus to start working with Pantaleon.”

Pantaleon, one of Latin America’s largest agribusinesses, reached out to Dr. Newman after hearing about the banana worker screenings. The company wanted to form a partnership to better understand the health concerns and promote the safety, health and well-being of sugarcane workers. Along with Dr. Jaime Butler-Dawson, Krisher formed the international research team at CHWE and began traveling back to Latin America. 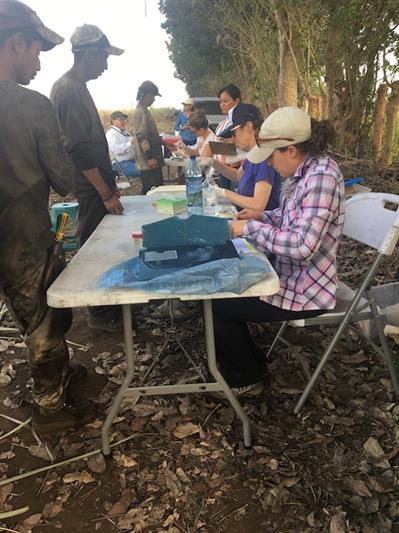 For more than five years, Krisher and the team have been investigating the causes of and risk mitigation strategies for CKDu with Pantaleon. She acts as project manager for the research team, leading the implementation of field research and evaluation projects at Pantaleon’s work sites in Guatemala, Nicaragua, and Mexico. The Pantaleon collaboration has resulted in new knowledge and interventions to improve worker health. The team has helped develop improved hydration programs, enhanced screening protocols for kidney health, training for detection and prevention of noise-induced hearing loss, workplace algorithms to prevent the spread of COVID-19, and business Total Worker Health leadership training.

This past year, they published eight manuscripts summarizing their projects.

“We are at the forefront of these huge issues that so many groups aren't willing or able to tackle,” says Krisher. The future of agribusiness is at the intersection of Total Worker Health and global health—heat exposure, disease prevention, mental health, and community health. A key distinguishment of the CHWE team is its willingness to work with industry to tackle some of those issues. “We recognize that many companies want to do the right thing for their workers and in many cases, work is the best place to start that, no matter the crisis,” adds Krisher. “Whether it's the climate crisis, the COVID-19 pandemic, or both happening at once, it's exciting to me that we're willing to grapple with these issues and work with like-minded employers and other collaborators to find practical and sustainable solutions to help workers.”

Since the start of the pandemic, Pantaleon has rapidly implemented COVID-19 symptom-based screening strategies at its mills, and as part of its larger protection strategy. The team is helping Pantaleon establish COVID-19 testing-based screening strategies at each of its operations in six countries (Guatemala, Nicaragua, Mexico, Brazil, Chile, and the United States). Krisher coordinates communications with the company to implement the recommended strategies.

Krisher is grateful to participate on a team that is both research-based and able to directly impact workers. “I’m excited that I’ve been able to merge my interests in global health and environmental occupational health,” she says, “but I think what really drives me is how we are not only able to do this research and answer these important questions to improve public health, but then take what we learn and apply it quickly so that it's relevant for people’s health, their well-being, and their work.”


Written by Laura Veith, marketing & communications coordinator at the Center for Health, Work & Environment based at the Colorado School of Public Health.