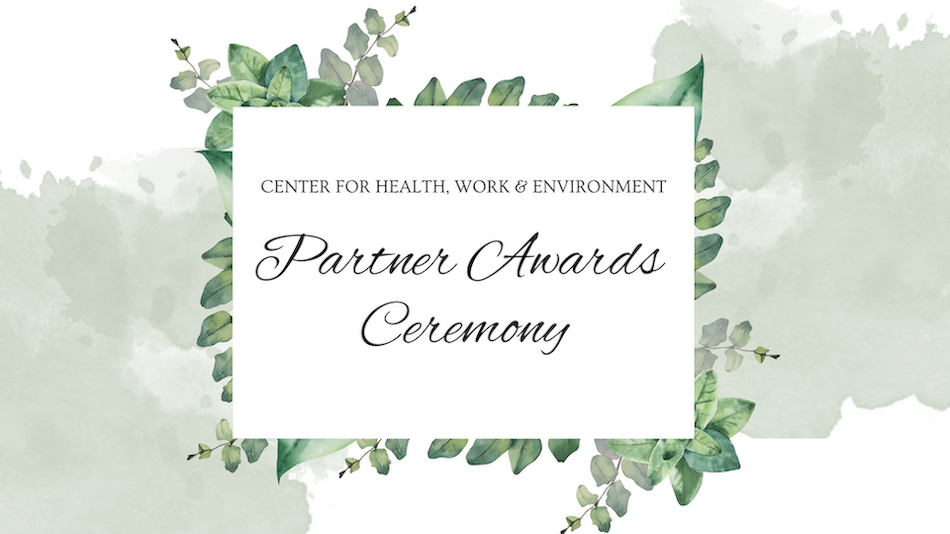 On July 21st, The Center for Health, Work & Environment (CHWE) hosted its third annual recognition event to honor the commitment and achievements of some of its key partners. To promote worker health, safety and well-being, CHWE relies on its partnerships with researchers, community groups, industry, and government.

Daniel Teitelbaum was awarded the Individual Lifetime Achievement Award. This award is given to one recipient every year who has had an exceptional impact on the field of occupational safety and health. Daniel Teitelbaum, MD, was recognized for his work as a clinician, advocacy for workers’ rights, and contributions to research in occupational and environmental medicine and occupational toxicology.

Currently an adjunct professor at the ColoradoSPH, he has dedicated 50 years of his career as an educator and mentor at both the University of Colorado (CU) and the Colorado School of Mines. A Fellow Emeritus of the Collegium Ramazzini, Teitelbaum has made important contributions as a consultant to the EPA and OSHA, including notable roles in the writing of eleven OSHA standards.

“Danny was acting on behalf of workers and communities faced with environmental and work-related health hazards before we really talked about environmental justice,” Lee Newman, MD, MA, distinguished professor at CU and director of CHWE, said. “His has made prolific contributions to research and authored of more than 50 peer-reviewed papers, monographs and chapters in occupational and environmental medicine. I have personally benefited from his scholarship, mentorship, and generosity.”

In true fashion, Teitelbaum took no credit for himself for the accolade, but paid tribute to the mentors that guided him into medicine, toxicology, and environmental justice over his 57-year career.

CHWE began conversations with the division’s director, Kristin Corash, in 2018. Corash, then the deputy director of CDLE, was interested in learning more about CHWE’s Health Links™ program and specifically gaining guidance on best practices for being a family-friendly workplace. CDLE presented and discussed belonging in the workplace well before it was a commonly accepted term in the diversity, equity, and inclusion field. DVR became a unit leader within CDLE, dedicated to belonging and Total Worker Health (TWH).  Most notable was the team’s creative and compassionate response to supporting workers and the communities it serves during the COVID-19 pandemic.

“We are thrilled and honored to be recognized by CHWE and receiving this Community Impact Award,” Corash said. “When COVID-19 began in March of 2020, our division was able to respond with the agility and resilience. I think it was because we had participated with Health Links and had gotten a lot of coaching on how to support our workers. We had a whole team of people in our agency that were helping to support transformational wellness.”

Pantaleon was awarded Partner of the Year. This honor is given to an organization that has demonstrated an exemplary impact on the field of occupational health and safety in partnership with CHWE. Pantaleon, one of South America’s largest agribusinesses, partnered six years ago with the overall goal of evaluating and addressing the health, safety and well-being of Pantaleon’s thousands of employees.

The two groups’ shared vision has been to apply TWH solutions to reduce both safety and health hazards for workers across chronic disease and mental health, and importantly, to share and disseminate these lessons throughout the industry. These best practices for employee TWH in the sugarcane industry, and more broadly, throughout agriculture are diverse and encompass many different types of workers. Pantaleon has remained engaged in and supportive of the research CHWE conducts and is eager to put the research findings directly into its business practices. These projects and field studies have resulted in many new health programs and policies that have benefited workers and improved working conditions at many different levels.

“I speak on behalf of our whole team at the Center that we are continually inspired by Pantaleon’s commitment and investment as an organization in the healthy safety of their workers, workers’ families, and the communities where they do business,” said Lyndsay Krisher, MPH, researcher and instructor at CHWE and the Department of Environmental and Occupational Health at the ColoradoSPH.

“The team at Pantaleon and the Center explore some of the most complicated questions in occupational health,” Inés Amenabar Cordon, Gerente de Desarrollo Responsable at Pantaleon, said. “We've been able to implement significant changes in our organization with the ultimate goal of improving overall worker well-being, and I think we wouldn't have been able to do as much as we have without the Center. We continue to strive for that knowledge, strive for finding many more questions to answer, more challenges to explore. I do believe that together we are creating a positive impact for workers, not just at Pantaleon, but hopefully throughout the world, from the information knowledge that we gather together.”

Thank you again to our partners far and wide that help make our work possible and better the lives of workers across the world.

Partner with the Center for Health, Work & Environment

Written by Laura Veith, communications and media program manager for the Center for Health, Work & Environment at the Colorado School of Public Health.