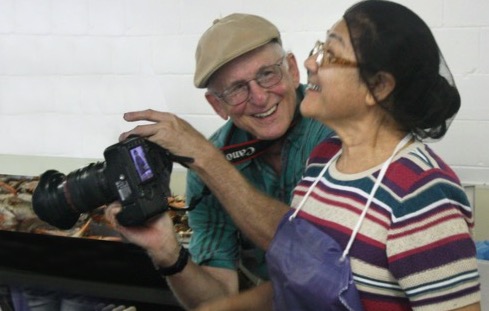 Earl Dotter can pinpoint the start of his career as a photographer to the exact day. His life’s work behind the camera began on April 4th, 1968, the afternoon that Dr. Martin Luther King Jr. was assassinated.  At the time, Dotter was pursuing advertising design at New York City’s School of Visual Arts, and on that fateful day one of his instructors ran into class and interrupted the presentation to tell them that King had just been shot. It proved to be a pivotal moment in Dotter’s career path plan, as he committed himself to become what he called a ‘socially useful’ photographer.

“After the King assassination, I saw heartfelt manifestations of that loss and was driven to document it as I walked the streets of Lower Manhattan in the days following April 4th,” Dotter said. He photographed a button on a store window that put King’s famous words, “I Have a Dream,” into the past tense. He captured a window washer cleaning the glass in front of King’s image in tribute to King. Dotter’s eye for detail captured the broken hearts of people as they worked. 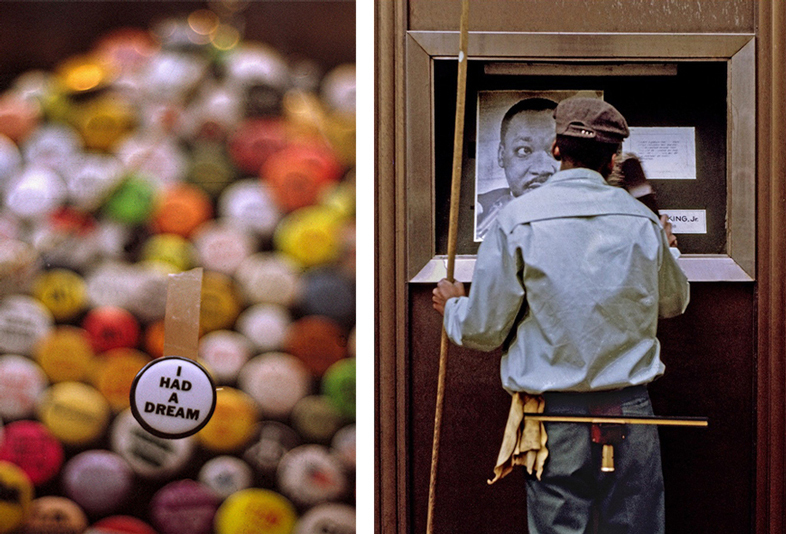 Not surprisingly, Dotter’s career of documenting the faces and working conditions of laborers across America highlights the theme of this year’s Black History Month: Black Health and Well-Being and focuses on the enormous contribution Black workers have made over not just decades, but the centuries, enslaved and free. The call to action that Dotter received on the night of King’s death, to use his art for social good, has driven him to shine a light on the dangerous realities of work for all Americans.

After Dotter graduated from the School of Visual Arts, he became a VISTA Volunteer (Volunteers in Service to America). Much of his early, career-shaping photo work comes from his time in the Appalachian Coalfields where he ultimately spent eight years photographing the miners when it was the most hazardous job in America. He used his camera to reveal their dangerous working conditions and suffering from black lung disease, or coal workers’ pneumoconiosis (CWP).

After VISTA, Dotter was involved in the UMWA Miners for Democracy reform election effort which directly led him to become the photographer for the United Mine Workers Journal. “Those were formative years for me,” said Dotter. “It was then that I began the work that continues to this day. It is photography focused on hazardous occupations, and the workers’ desire to improve their circumstances wherever they find themselves in harm’s way.”

While working in West Virginia, Dotter learned about a historic industrial disaster that occurred at the West Virginia Gauley Bridge-Hawks Nest Tunneling Operation between 1930 and 1932 as workers, most of whom were Black, tunneled through the silica-laden rock of the mountain without any respiratory protection. That tunneling work, which would supply water from the New River to an electric turbine for the Union Carbide Company, took the lives of over one-third of those workers, who quickly succumbed to Silicosis disease.

“I was working with coal miners at that time, but when I learned about this disaster, it further motivated me in my work,” said Dotter. 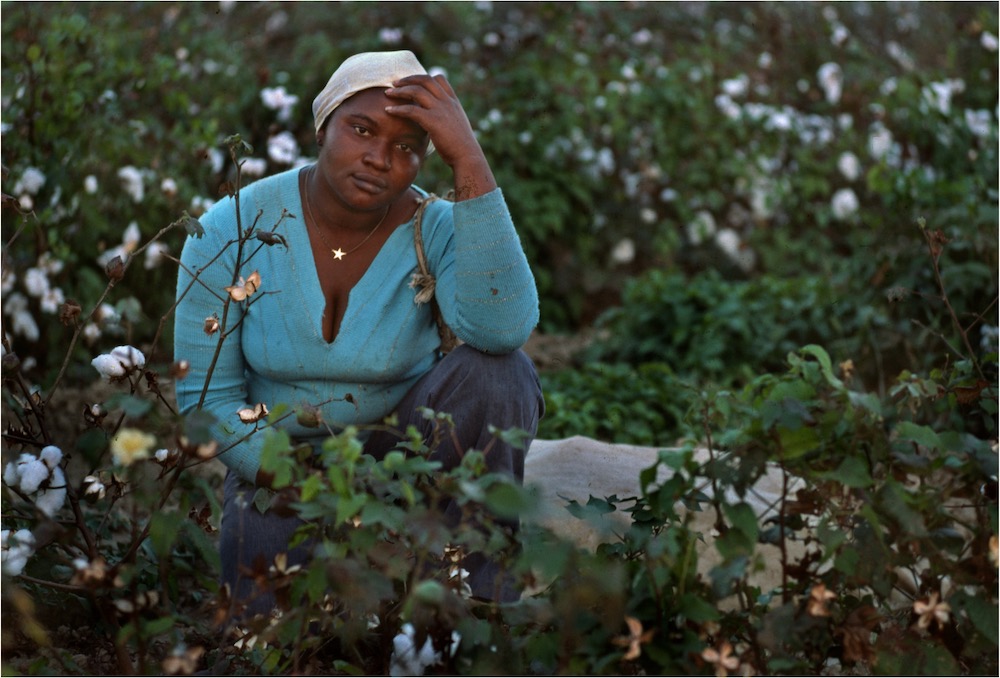 Closing out his work with the United Mineworkers Journal toward the end of 1977, Dotter soon found himself in Bolivar County in the Mississippi Delta, where in 1978, he photographed Black workers still hand-harvesting the cotton crop.

Eula Bingham had become the first female director of the Occupational Safety and Health Administration (OSHA) and had promulgated a new cotton dust standard. Dotter was hired based on his experience with coal miners to document the story of cotton mill workers and their need for effective protection from cotton dust in the mills. 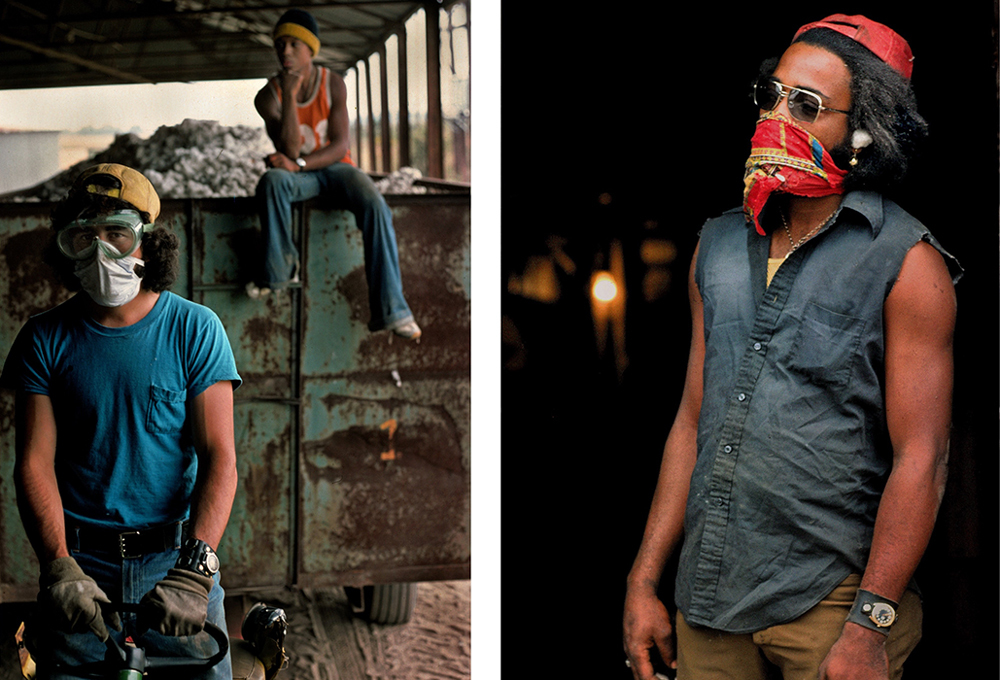 When the cotton arrived at the local cotton gin from the fields, most of the Black workers Dotter photographed there did not have the proper personal protective equipment (PPE) and had stuffed cotton in their ears to dampen the machinery noise and used rags or bandanas over their mouths to protect themselves from the airborne cotton dust.

“You can see the tractor driver in this photo has a pretty good mask and eye protection, whereas the young man who probably loaded the cotton into the wagon has virtually no protection,” said Dotter. “People respond to being treated with dignity and the success I've had is a result of the recognition that maybe we, my subjects and I, can be collaborators in the goal of making the workplace safer.”

Over the last decade, Dotter has been collecting and photographing employee photo ID badges that also tell the story of the dangerous working conditions Black workers experienced during World War II and later. “I began collecting these badges because the photo identified the worker, and the badge named the company that had harmed them,” he said. 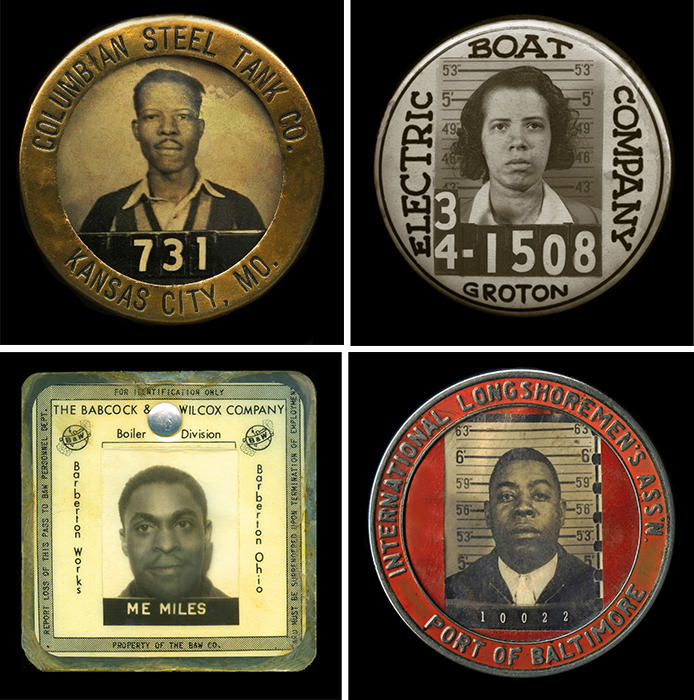 “While we do not know the detailed story of these workers, we can make educated guesses that each was working in hazardous environments based on the nature of their role.” Dotter explained that the man working for the Columbian Steel Tank Co. most likely worked in confined spaces which we know is an ongoing hazard that continues to be addressed even today.  And given that the Navy had mandated that warships constructed during WWII must be insulated with asbestos, it can be surmised that the woman at the Electric Boat Company was likely exposed to asbestos at her workplace.

ME Miles from the Babcock and Wilcox Boiler Division was likely involved in creating boilers that, again, were insulated with asbestos. Longshoremen at the Port of Baltimore during this time would load boats with loose asbestos heading to South and Central America. Those same ships would come back loaded with agricultural products, and so a longshoreman like the one seen here very likely would have been unknowingly exposed to lethal asbestos fibers.

Dotter has carefully photographed these badges and exhibited them to personalize workers who were often exposed to hazards in their workplaces.

Dotter maintains relationships with worker safety and health organizations, labor groups, and the Harvard School of Public Health, where he has been a Visiting Scholar for over twenty years. Dotter continues to use his photography to tell workers’ stories as they make their case for safer and healthier working conditions. 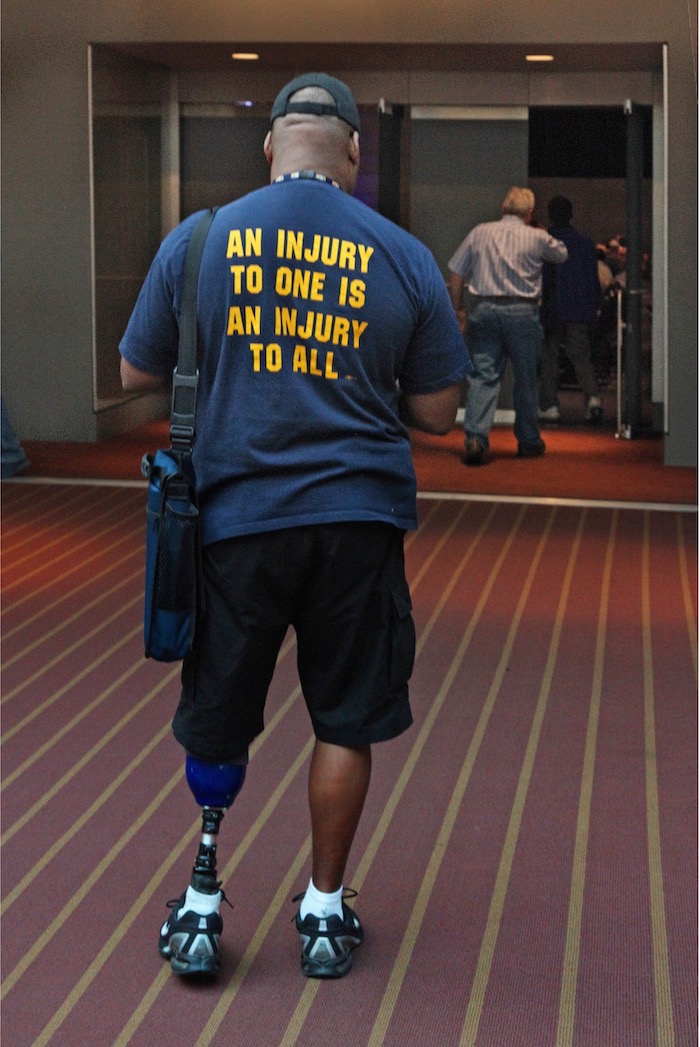 The above photo was taken at a Steelworkers Annual Health and Safety Meeting in Pittsburgh. The steel worker’s t-shirt message gives voice to the motivating energy behind Dotter’s photography work. “I believe we all lose: the workers, their families, their employers, and society at large when workplace safety and health is neglected.”

“I view my photography as a means to reach someone who might ordinarily pass a worker by, to spark concern and meaningful action to protect the people who are the engines of our economy,” Dotter said. “The toll of fatalities and injuries in workplaces is still far higher than it should be. If there is a reason for me doing what I do, it is to be a force to help rectify this loss to society.”

This February, as we read inspiring stories of the many Black men and women who have transformed history, many through their occupation, we recall the theme of this year’s Black History Month: Black Health and Well-Being. Just as an injury to one worker is an injury to all, the health of one Black worker is the health of all workers. Dotter’s photography calls us to place ourselves in the shoes of those workers.

His work inspires us to personally understand their occupational hazards and struggles, and especially for those of us working in public health, dedicate ourselves to the socially useful work of protecting them.

Written by Laura Veith, communications and media manager at the Center for Health, Work & Environment at the Colorado School of Public Health.


AIHA PRESS recently published Dotter’s retrospective book entitled: LIFE’S WORK, A Fifty Year Photographic Chronicle of Working in the U.S.A. with 500 Color and Black & White photographs. He has graciously offered readers of this blog a price reduction for purchasing a signed copy of his book. Typically $75, readers can receive a signed copy for $45 (including shipping).

Just mention the Center for Health, Work & Environment by emailing him to order via earldotter@gmail.com. He will send you a PayPal invoice to your email address, for the purchase amount.